The short-of-capacity attendance figure showed that not enough Californians or West Coasters were able to fill the Granddaddy in the absence of Florida State fans who — being pragmatic — wanted to save travel expenses for the College Football Playoff National Championship Game… the game the Oregon Ducks are playing in on Monday night.

I guess a battle of top 10 teams wasn't a big enough draw for that corner. pic.twitter.com/g5hRJmEIvr

There were loads of empty seats for the Pac-12 Championship Game in Levi’s Stadium (in Santa Clara, California) on Dec. 5: 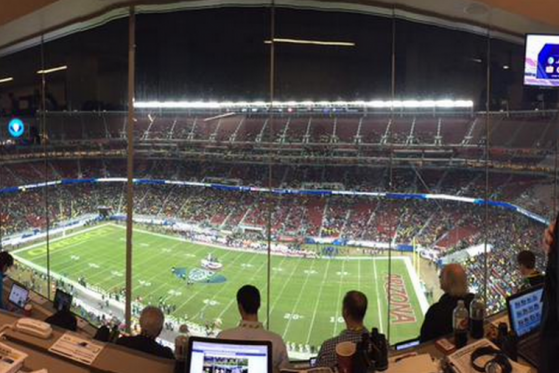 It’s clear, and there’s no point in denying it: West Coast and Pacific time zone college football fans will never care as much about this sport as Southerners and Midwesterners do. This is a cultural reality, entrenched and constantly reaffirmed in the college football marketplace.

As someone born in Phoenix and now living in Seattle, I’ve seen this dynamic up close. There was a time when I tried to fight it, but as anyone who has lived in the West for any prolonged amount of time can attest, there’s a tradeoff involved in living out here. We don’t care as passionately about our sports in all times and seasons, but we adore the slower pace of life and the advantages of this time zone.

When the Tigers play the Mariners in Seattle, the start time for a West Coast sports fan is 7:10 p.m. For someone in Michigan, 10:10.

When the NCAA tournament title game is played, it’s 6:23 here in the West, 9:23 in the East. Our kids can actually watch the game in full.

When the World Series starts, it’s 5:37 in the West, 8:37 in the East. A four-hour game with 11 pitching changes ends before 10 p.m. out here. In the East… well, we in the West don’t really know how you manage to do it. There’s a lot to love about this region. West is Best? That’s real for us. Don’t fence us in.

However, there is absolutely no question that in college football — more than any other sport — being in the West has carried a price.

Our late games end near 2 in the morning Eastern time. The Pac-12 Conference is easier to shoehorn into pre-packaged identities and perception-based silos because a lot of the nation just doesn’t watch late games live… and, yes, because DirecTV doesn’t carry Pac-12 Networks. (This problem, of course, long predated P-12 Net and the DirecTV problems.)

Want to add up all the times non-USC Pac-12 teams have suffered over the years?Here are just a few:

California, not in the Rose Bowl since the 1958 season, was politicked out of the 2005 game by Mack Brown and Texas.

Arizona State, not in a BCS game since the 1997 Rose Bowl, was not chosen for a BCS bowl in the 2007 season. Three-loss Illinois got in, though.

No one could make room for Arizona in a BCS bowl in the 1998 season.

Oregon didn’t get into the 2001 season’s BCS title game, the 2002 Rose Bowl against Miami.

Western fans just don’t travel as well to bowl games. This is a key reason why there’s still no Pac-12/SEC bowl tie-in, one of the great deficits and absences in college football’s recent history. The Western postseason experience in college football has been rooted in the fundamental idea that Midwesterners want to escape the bitter cold and come out to California or Arizona for a few days of sun. Western fans traveling outside their region? Good luck with that.

West is Best — the saying holds true in so many aspects of lifestyle, but not in college football.

Read the whole piece, but here are the two key details to extract from it: 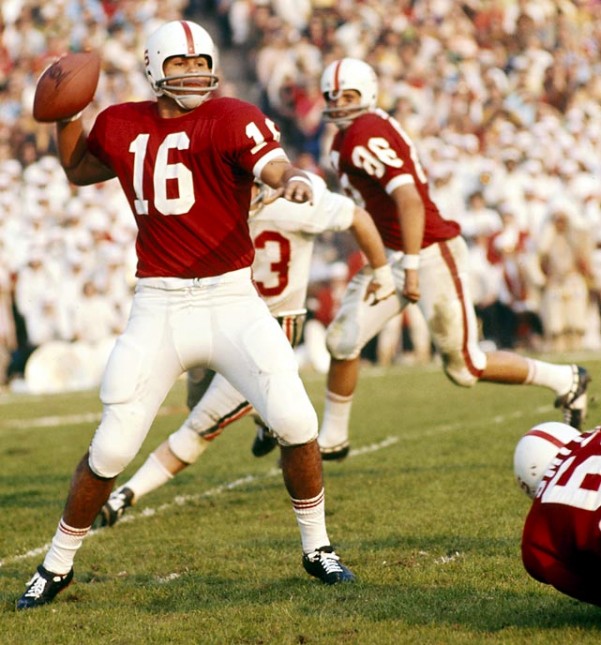 1) Mariota became the first non-USC Pac-12 quarterback to win the Heisman since Jim Plunkett of Stanford in 1970.

2) Mariota became the first non-USC quarterback from the Mountain or Pacific time zones to win the Heisman since Ty Detmer of BYU in 1990. 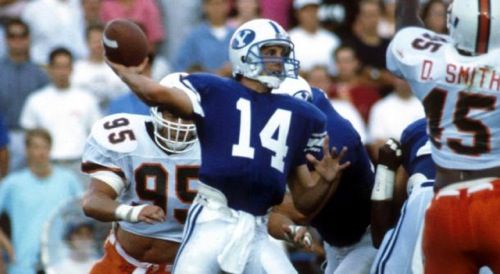 It’s just a plain point of fact: The West doesn’t get a lot of non-USC love. It hasn’t been able to point to many mountaintop moments over the years if the Trojans weren’t part of the mix.

The Oregon Ducks are very much playing for themselves on Monday night. Oregon has established its own independent, stand-alone brand, the work of many years and many people, beginning with Phil Knight and Rich Brooks, and then flowing through Mike Bellotti to Chip Kelly to Mariota to Mark Helfrich (among others). If the Ducks win, it’s their championship more than anyone else’s. Let’s put that front and center.

However, Oregon is also playing for the West. The last non-USC national champion in the sport was Washington, in 1991 (as a shared champion with Miami). The Huskies finished first in the Coaches’ Poll, while the Hurricanes were first in the AP writers’ poll. Since then, the non-USC portion of the Pac-12 has found it very hard to get its foot in the national championship door.

You’ve already been reminded of Oregon’s 2002 Rose Bowl snub. Washington made a strong run in the 2000 season, but didn’t quite make the title game. Oregon State was also a big-time team in that same 2000 campaign, but the Beavers couldn’t run the table, either. Washington State made a couple of Rose Bowls but lost them both (in 1998 and 2003). Cal’s moment never quite arrived in that 2004 season. Stanford began a great run in 2010 under Jim Harbaugh but won the Rose Bowl following a regular season (2012) when the team lost twice.

In the current Pac-12 South, a profound source of irony is that the best non-USC team over the past 10 years is the team that didn’t join the conference until 2011: Utah. The Utes finished in the top four of one national poll in 2004, and in both polls in 2008 (second in the AP poll). UCLA has floundered, never recovering from its loss to Miami in December of 1998, one win away from a spot in the first BCS title game opposite Tennessee. Arizona and Arizona State have been constant teases since the BCS era began. Colorado had its own share of great moments in the Big 12, but like Utah, it hasn’t been able to achieve at a high level since coming to the Pac-12.

It’s quite clear: Non-USC Pac-12 teams have had it rough over the past quarter of a century. Some teams — Stanford and, especially in the present moment, these Oregon Ducks — have largely enjoyed the past five years, but that sweetest taste of championship glory has proved to be elusive throughout the non-USC precincts of the American West.

A lot of what hurt the Pac-12 (when it was still the Pac-10) was poor leadership. If you hadn’t known this, consider the fact that when departing Pac-10 commissioner Tom Hansen was honored in a ceremony at the 2010 Rose Bowl, Oregon fans booed him. Other fan bases in the league felt the same way. Subsequent years under new commissioner Larry Scott have witnessed the creation of Pac-12 Networks and an infusion of TV money which has substantially upgraded the quality of coaching in the league.

Is this a Larry Scott title if Oregon wins? No, not really — again, Oregon had begun to become “Oregon” before Scott arrived. However, the TV money in the league built up Arizona to the point that the Wildcats could hire Rich Rodriguez. Under Rich Rod, Arizona became a team that beat Oregon and was in the playoff mix before the Pac-12 Championship Game. The Pac-12 has stood on par with the SEC this season, at the very least. Some would put the Pac ahead of the SEC based on non-conference Power 5 records and other select reasons. Is this partly the result of better leadership in San Francisco, as opposed to Hansen’s tired run in Walnut Creek, which better served the non-revenue programs compared to the big-ticket sports?

There is no doubt on this point… certainly not in Pac-12 country.

There’s a postscript worth passing along about Tom Hansen getting booed at the 2010 Rose Bowl: Oregon’s opponent that day just happened to be… yep, of course… Ohio State.

If Oregon can beat the Buckeyes this time — something it failed to do five years ago — it would serve as a powerful representation, both actualized and metaphorical, of how college football has grown in the Western United States.

You won’t hear chants of “P-A-C! P-A-C!” in Arlington, Texas, and there won’t be a national narrative machinery cranking into high gear on ESPN if the Ducks win the title. However, an Oregon victory — if it should happen — would represent a moment of catharsis for a lot of people in the American West.