The first ever official College Football Playoff semifinal will be just the third bowl matchup of Heisman Trophy winners, as Jameis Winston and the defending national champion Seminoles look to run the nation’s longest winning streak to 30 games. Heisman Trophy winner Marcus Mariota and Oregon, however, have different ideas. The Ducks sit just two victories away from their first national championship.

The Journey for Florida State

Florida State’s venture to Pasadena did not come easily. The Seminoles have battled through injuries and off-the-field issues and have won seven games decided by six points or fewer. Florida State has overcome multiple-score deficits on four occasions, including a 21-0 hole on the road against Louisville. Despite their struggles, the Seminoles managed to win a third straight ACC title and remain the nation’s last undefeated team for a second year in a row.

The Journey for Oregon

After an early 46-27 victory over Michigan State, Oregon was slated by some as the team to beat on a national level. Midway through the year, the Ducks notched a lackluster 38-31 win over Washington State, which was followed by a home loss to Arizona. Oregon’s playoff chances looked to be in doubt, but Mariota and the high-flying Duck offense defeated the next eight opponents by an average margin of 26 points. Oregon ultimately got revenge on the Wildcats, beating them 51-13 in the Pac-12 Championship Game. 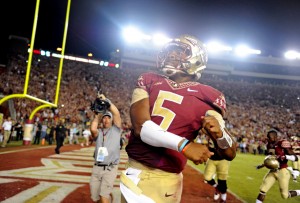 Jameis Winston passed for over 3,500 yards and 24 touchdowns for Florida State this season. (USA Today Sports)

With a record of 26-0 as a starter, Florida State sophomore quarterback Jameis Winston will be facing an Oregon defense that ranks just 103rd in the country against the pass. Oregon will be without its best player in the secondary, as cornerback Ifo Ekpre-Olomu suffered a knee injury in practice leading up to the Rose Bowl. The Seminoles have a mix of youth and experience. Rashad Greene is Florida State’s all-time leading receiver while fellow senior Nick O’Leary became the first Florida State tight end ever to win the John Mackey Award. Over the final half of the season, freshman running Dalvin Cook has arguably been the Seminoles’ offensive MVP. Cook has 905 yards on the ground this season, including 321 in the last two games.

Though Oregon ranks just 103rd against the pass, there is no shortage of talent in the secondary. Safety Erick Dargan leads the team with 82 total tackles and the Pac-12 with six interceptions on the season. With Ekpre-Olomu out, the Ducks will need a dominant effort up front, which was not a problem against Arizona on December 5. Junior linebacker Christian French leads Oregon with 6.5 sacks on the season, while fellow linebacker Torrodney Prevot and defensive tackle DeForest Buckner each have four.

Slowing down Marcus Mariota isn’t easy for any defense, particularly one without a pass rush, which has summed up Florida State this season. Meanwhile, Mariota has accounted for an ungodly 52 touchdowns compared to just two interceptions on 372 pass attempts with his team averaging better than 46 points per game.

Losing tight end Pharaoh Brown in a November victory over Utah certainly hurt, but Oregon has five other players with at least 25 receptions this season including Byron Marshall, who leads the team with more than 800 yards receiving. Freshman Royce Freeman leads the ground attack with 1,299 yards rushing on the year and a Pac-12-best 16 rushing touchdowns. At 230 pounds, Freeman is a physical back, which is the type that’s given Florida State trouble this season.

Florida State ranks just 107th in the country with 17 sacks this season, but the Seminoles have a pair of All-ACC performers up front in Eddie Goldman and Mario Edwards Jr. Florida State will come in as healthy as it’s been in a while, however: Freshmen Lorenzo Featherston and Jacob Pugh should be ready to go along with junior defensive tackle Nile Lawrence-Stample. Safety Jalen Ramsey has done just about everything for Florida State at the “star” position this season, while junior linebacker Reggie Northrup became the first Florida State player since Buster Davis in 2006 to record 100 total tackles in a season.

Special teams played a huge factor in last season’s trip to Pasadena for Florida State and could again on Thursday. The Seminoles possess a consensus All-American in kicker Roberto Aguayo, who is 46-for-49 for his career on field goal attempts. Aguayo has a leg that can hit from well over 60 yards. Oregon may not have an All-American, but the kicking duo of Matt Wogan and Aidan Schneider have combined to make 15 of 18 field goal attempts this season. Their range is much more limited, though. Oregon’s Charles Nelson poses the biggest threat in the return game — two of his 11 punt returns this season have gone for scores.

The head coaching matchup between Florida State’s Jimbo Fisher and Oregon’s Mark Helfrich will certainly be a battle of great offensive minds. In five years at Florida State, Fisher has compiled a 58-10 record which includes three ACC titles and a national championship. In his last 49 games, Fisher is 46-3. He’s a perfect 4-0 in bowl games. Helfrich is looking to establish himself as one of college football’s best. In two years as the head man at Oregon, Helfrich has gone 23-3, with seven of those wins coming against ranked opponents.