This is it, you’ll hit the heights.

And oh, what heights we’ll hiiiiiiit.

On with the show, this is iiiiiiiiit!”

1. This is the first time a college football national championship game involves teams that played just a week and a half earlier, as opposed to three and a half or four weeks earlier. How will the lack of a layoff affect this game, if at all?

To me, this will help the teams with rhythm and flow. Neither team really has a pressing injury where they need an extra week or two to heal up from. Both teams will come out nervous and shaky, but at least this way they are not rusty as well. There is a huge difference between beating on each other in practice and another team on the field. Also, either way, it will be the first time that teams have played a 15-game schedule. Any of that grind would occur either way, regardless of the amount of time. The biggest hit is on the coaching staff and their preparation in watching film. But at this point, there is plenty to be noted on each team and plenty of film out there. Getting back at it in about half the time should improve the game play.

This should bring out the best in the two offenses, which should not have to worry about rust. Then again, conventional wisdom was busted up in the semifinals. Oregon and Ohio State were both above average on offense after layoffs of more than three weeks. Oregon was legitimately great against Florida State. Could the layoff help the defenses to identify some things on film that will make the offenses struggle? Perhaps… but don’t bet on it happening. This is also a fast track with a synthetic surface in a dome. It’s conducive to a high-scoring game.

2. What’s the biggest thing to look for when Ohio State has the ball?

Cardale Jones is the most intriguing aspect of the Ohio State offense. Clearly, no other quarterback has looked as strong and confident in his first two starts on such a large stage. While Jones has not allowed the Buckeye offense to lose much of a beat after losing J.T. Barrett, he did have times in the Alabama game where there were some struggles. He completed only 18-of-35 passes and threw an interception. Ohio State cannot turn the ball over against that Oregon defense that thrives on takeaways.

Devin Smith against Oregon’s corners. The Ducks — minus Ifo Ekpre-Olomu — contained Florida State’s Rashad Greene, limiting him to under 10 yards per catch. Smith needs to get free against an Oregon secondary that stood tall against the Seminoles, and he’ll need to do so more than once. Ohio State’s target: get three plays of 30 yards or more from Smith. 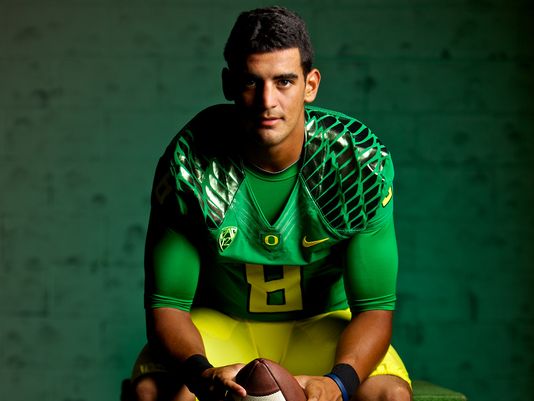 3. When Oregon has the ball?

With the pressure that Ohio State is able to provide up front, the biggest aspect for Oregon is protecting the Heisman winner. While Mariota is able to move around very well, he is much more effective when he is doing it on his own will. If the Ducks can allow Mariota time to throw and make his reads, the Oregon offense should continue its seasonal track meet.

How well does Ohio State’s front seven, especially the linebackers, contain Marcus Mariota as a runner? With Darren Carrington joining Devon Allen and Pharaoh Brown as a player who won’t be able to play in this game (due to his suspension this past week), the Ducks will need to get a little more out of Mariota’s legs than his arm. He’ll obviously still need to throw, but his ability to outrun defenders on the edges will likely be needed on several occasions tonight. How well OSU’s outside backers respond to broken plays — and how they judge when to abandon man responsibilties to step up on Mariota — will have a lot to do with the outcome of this game.

4. Will anything Oregon learned from playing Florida State help or hurt the Ducks against Ohio State?

Oregon learned that it can compete against a team that has won recent National Championships. Not only that, they can utterly curb stomp one. Oregon learned that its balanced attack can have that same success against fellow national powers as it did in the Pac-12. The Ducks also may have a new home run hitter with Thomas Tyner, who picked up 124 yards on the ground on a 9.5-yard average against the ‘Noles.

The positive side: Oregon learned that its offensive line can power an opposing defensive line off the ball. This is UO’s most direct and uncomplicated path to victory, namely, if its offensive line dominates. Is this a realistic expectation for a neutral analyst? Probably not. Should UO’s offensive line realistically think it can take control of this game? Absolutely.

The negative dimension of the Rose Bowl relative to this game is as follows: The Ducks got a lot of fumble luck against FSU. If the bounces don’t go their way in JerryWorld, they might be startled to see how different this result becomes. 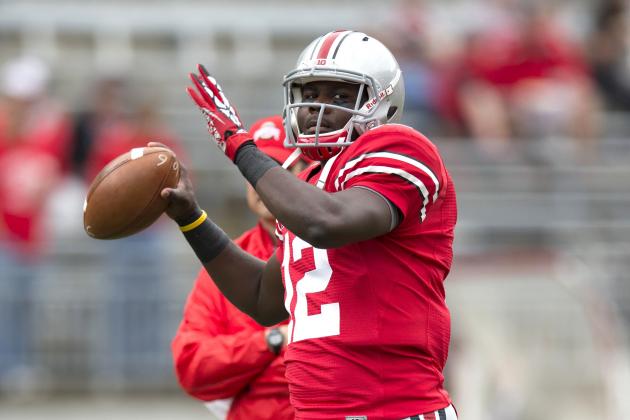 5. Will anything Ohio State learned from playing Alabama help or hurt the Bucks against Oregon?

Ohio State learned that it can have confidence in Cardale Jones, after a second straight victory over a national power. But they also learned again that running the football is the bread and butter for the Buckeyes. Ezekiel Elliott has 450 yards in the past two games and that success will need to continue for Ohio State to have the same success.. The Ducks are not as strong defensively as Alabama, so the offensive confidence for the Buckeyes should be sky high.

The positive side: The Buckeyes saw Cardale Jones deal with a lot more game and scoreboard pressure compared to the Wisconsin contest… and Jones passed his test with flying colors. There should be no substantial doubts about Jones’s ability to handle this situation in its entirety.

The negative side: Mariota is vastly superior to and far more versatile than Alabama quarterback Blake Sims. Mariota can create so many more (and more severe) headaches for Ohio State’s defense. The switch to the Heisman winner after seeing Sims inconsistently spray the ball in the Sugar Bowl could leave the Buckeyes underequipped on defense.

6. If Urban Meyer wins this game, does he surpass Nick Saban as the best active coach in college football… or is he already there… or is there another, better answer to this question?

To me, coming into the game, Meyer and Saban are No. 1 and 1-A. Clearly, they are the two superstars in the college coaching game and second is a far distance off. By that same token, it would be hard for me to put Meyer ahead of Saban just because of a win Monday. Even with a win, Meyer would still have one fewer National Championship that Saban, but the fact that he has only lost 26 college football games in his life is unreal. The biggest difference between the two for me is age. Saban is 63 and Meyer is 50. If Meyer can keep the pace up and remain healthy enough to coach, he can become one of the all-time greats and eventually pass Saban, but I just don’t think that Monday would push him over the top yet.

If Meyer wins this game, he’ll have three national titles compared to Saban’s four. You could say, “Edge, Saban,” for that reason. However, in much the same way that nobody would put Eli Manning over Peyton as an all-time quarterback just because he has two Super Bowl rings and Peyton has only one, you wouldn’t just say, “Well, 4-3, so Saban.”

Consider that Meyer led Utah to an unbeaten season in 2004. Consider that he led Ohio State to an unbeaten season in 2012 and would have been in the national title game — instead of Saban’s Crimson Tide, interestingly enough — had the Buckeyes’ administration not made a series of unwise decisions in prior years. Consider that Nick Saban — as great as he is — hasn’t taken a team with a third-string quarterback to the national title game. Consider that Meyer and Saban — after splitting SEC title games in 2008 and 2009 — arrived at a sort of rubber match in the Sugar Bowl… and Meyer won.

At 4-2, I’d give Saban an ever-so-slight edge, especially since he’s done all he’s done in the SEC. If Meyer wins, I think the two coaches stand on equal footing, despite a 4-3 count for Saban in terms of national crowns.