The Student Section’s review of the 2014 college football season rolls along, item by item. In this piece, we tackle the 10 best offensive coordinators from the past season.

Kiffin’s arrival at Alabama was greeted with predictable scoffing and laughter after his failed tenure as USC’s head coach. However, being a coordinator and a head coach are two different things. Kiffin was in a position to succeed in Tuscaloosa. By and large, he did. He belongs on this list… just not the front end of it.

Kiffin’s play selection and overall approach in the Sugar Bowl against Ohio State — chiefly, his unwillingness to stick with Derrick Henry and trust the ground game — were horrible. He also presided over shaky performances from Alabama’s offense in road games against LSU, Ole Miss, and Arkansas.

For the most part, though, Kiffin helped Nick Saban guide a flawed team to the SEC title and the College Football Playoff. He didn’t turn in a flawless season, but he was part of the solution for the Tide, a lot more — at any rate — than many fans were ready or willing to expect at the beginning of the season.

The Tigers’ renaissance is primarily the product of head coach Justin Fuente, but under Dickey — the former head coach at North Texas — Memphis’s offense flourished, finishing in the top 25 in scoring offense. The Tigers hung 55 on BYU in the Miami Beach Bowl. Dickey deserves his due.

The Hilltoppers did not have a great season overall, but don’t blame their offense, which buried Bowling Green in an eye-catching season opener and then posted 67 on Marshall in one of the season’s more consequential upsets. Western Kentucky had the perfect 2-point conversion play to win that game on the final snap of overtime. WKU’s defense was a sieve in 2014, but don’t blame Helton — he did his part.

The revival of Skip Holtz’s coaching career in Ruston, Louisiana, was helped along by Petersen, who guided the Bulldogs’ offense to a top-15 finish in scoring. Petersen deserves a lot of credit for Louisiana Tech’s C-USA West Division title.

The expectations at Boise State are rightfully great, but in year one of the post-Chris Petersen era, it was more than understandable that the Broncos’ fan base was worried about how the program would fare under a first-year offensive coordinator. It wasn’t all peaches and cream for Sanford in the first half of the season, but he and Bryan Harsin worked with Grant Hedrick to make him not just a better quarterback, but a player who could perform away from home. The Fiesta Bowl win over Arizona certainly cemented Sanford as one of the better offensive coordinators from the past season.

Ruse had the benefit of a previous FBS tour of duty as an offensive coordinator. He served at Arkansas State several seasons ago before joining a few FCS programs. When Willie Fritz made the leap from the FCS to the FBS at Georgia Southern, he brought along Ruse. Georgia Southern might not have tricked the rest of the Sun Belt, but it certainly outmaneuvered the whole league. Ruse’s offense never lost a conference game and snagged a top-10 finish in scoring offense. Ruse had a lot to do with the Eagles’ soaring and sensational season in the Sun Belt. 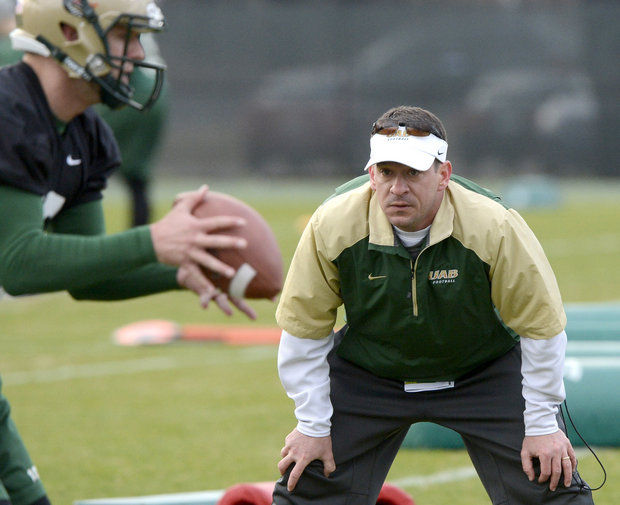 Bryant Vincent, formerly of UAB and now back on the coaching staff at South Alabama for a second go-round.

The quality of UAB’s season — produced by head coach Bill Clark and his assistants — should not go unnoticed. Though the Blazer football program is no more, Vincent’s work will always exist for others to appreciate, and South Alabama promptly picked him up when the UAB program died. UAB averaged just over 33 points per game in 2014. Vincent pushed Clark and UAB to a bowl-eligible position this past season. That’s pretty spectacular.

The Yellow Jackets’ offensive coordinator did a damn fine job this season — he deserves a promotion. Could be a fair head coach in a Power 5 conference if he wanted to be one.

Oh, wait… he IS the head coach!

The new head coach at the University of Houston was, in 2014, The Quarterback Whisperer, given his ability to rapidly unlock the talents of two quarterbacks who were not first-stringers when August camp began. Herman’s achievements were nothing short of remarkable, and if you wanted to say he was the best offensive coordinator in the land this past season, you wouldn’t get a prolonged argument.

That said, one man — given the circumstances — has an equally good case to make: 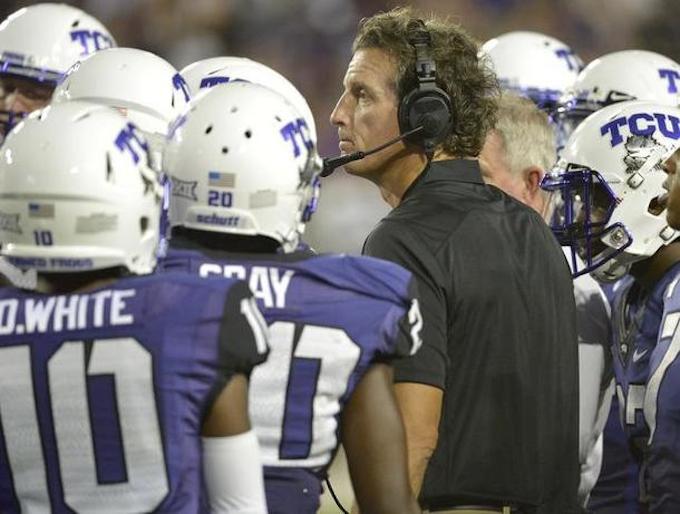 Gary Patterson’s an elite head coach, but the thing to realize about many elite head coaches is that they surround themselves with great assistants. If Doug Meacham hadn’t been hired by Patterson, would TCU be in the lofty position it inhabits today? Very probably not.

Even though Ohio State lost two quarterbacks this season, making Tom Herman’s body of work nothing short of an A-plus, Meacham also gets an A-plus for what he did with TCU’s offense, which finished second in the nation in scoring. Ohio State was right there with TCU in the top five.

The tiebreaker, from this vantage point, is that Ohio State hadn’t lost a regularly-scheduled game (one of the 12 firm regular-season dates with an opponent known well in advance) in either of Urban Meyer’s first two seasons on the job in Columbus. TCU, on the other hand, went 4-8 in 2013 and was a mess, partly because previous quarterback Casey Pachall battled the demons of alcoholism, throwing Trevone Boykin into the fire before he was fully ready.

From this unsettled situation, Meacham put everything in order alongside Sonny Cumbie. It’s either Herman or Meacham for Best Coordinator of 2014. You can’t go wrong with either choice. TCU’s struggles give Meacham an ever-so-slight nod.