No, I did not expect to use an NFL game as the source of column material this week, but much as another Green Bay-Seattle game from a few years ago — the “Fail Mary” game — magnified what I had written about a college football controversy, this latest Packer-Seahawk tussle also says something important about college football, albeit indirectly and not directly.

Why not explore the matter, then?

Very simply, Sunday’s NFC Championship Game showed Americans that for all the ways in which we try to draw a lot of distinctions between two versions of football that undeniably own a number of differences, there’s a lot more that’s similar about college and NFL ball than any of us might be willing to acknowledge.

First of all — and this deserves stand-alone treatment in a separate piece — both college and pro football fans simply cannot agree on what a good game-management decision is. To be clear, this is not a clash between college and pro football fans; this is a conflict within the separate communities of college fans and NFL fans. Neither group seems to be overwhelmingly in favor of one approach or another. There is too much internal division in each camp. Again, more will be said on this in a separate piece.

For now, let’s branch out and note the various other ways in which the NFL really doesn’t transcend college football, underscoring why these versions of our nation’s most popular sport are more alike than many partisans could care to admit.

They’ve also played two NFC Championship Games that were absolutely awful on the offensive side of the ball.

A year ago against the San Francisco 49ers, Russell Wilson and the Seahawks’ offense were almost as jittery as they were against Green Bay this past Sunday. Wilson fumbled early in the game. The Seahawks were inept on offense in the first half. Later in the game, Marshawn Lynch bobbled a handoff on fourth and goal at the 1. The Seahawks started multiple second-half drives inside the Niners’ 40-yard line and couldn’t get touchdowns on any of them. Seattle won that NFC title tilt against the 49ers because of its defense… and because San Francisco quarterback Colin Kaepernick dissolved into a pool of turnovers in the fourth quarter. The two offenses in that game were wretched.

This past Sunday against Green Bay instead of San Francisco, not much was different.

Moreover, if you go back through recent conference title games in the NFL, mistakes — not great plays — have typically decided outcomes. Think of Kyle Williams’s special-teams disaster, sinking the Niners against the New York Giants in January of 2012. Think of Lee Evans dropping the pass that would have lifted Baltimore over New England earlier on that same day in January of 2012. Think of the New York Jets getting exposed twice in the AFC title game, their limitations on offense with Mark Sanchez finally emerging in all their fullness. Think of Brett Favre’s interception following the Minnesota Vikings’ penalties and Brad Childress’s game mismanagement against the New Orleans Saints.

Plenty of NFL fans mock the college game and make fun of the messy, disjointed title games (now semifinals as well) that are more the rule than the exception. Yet, can the NFL point to a noticeably better standard in the conference championship game round? It can’t… not recently. You’d have to go back to the 1990s to identify a point in time when conference championship games normally felt like true showcases of professional football. Today, that’s more an aberration when it emerges.

Packers-Seahawks provided incredible theater, tension, and drama… but the game was incredibly bad from two teams vying for the Super Bowl.

Sorry, NFL fans. The College Football Playoff National Championship Game was played at a higher level — relative to the talent and experience on the field, of course — than Packers-Seahawks, and it’s not even a debate.

Seahawks and Ohio State combined for 9 turnovers, -6 in TO margin. But gave up a combined 16 points off them (1.7 per). Both won.

2) THE NFL AND COLLEGE FOOTBALL BOTH HAVE FLAWED OVERTIME SYSTEMS

You would think that it’s not too hard to honor a few basic principles in a football overtime period. Yet, as Sunday showed us, the NFL gets it wrong in overtime by preventing one team from getting a possession, simply based on the flip of a coin.

It’s absurd, is it not? In a multi-billion-dollar business — one which requires players to become violent for three hours and risk their physical well being for our entertainment — a coin’s side can (and on Sunday, did) enable one team to make the Super Bowl without the opposition ever getting a chance to score. In college football, winning the overtime coin toss merely means you choose whether you want to play offense or defense first. In the NFL, winning the overtime coin toss can render Aaron Rodgers powerless to do anything about his team’s situation, as was the case for Favre in the 2010 game matching his Vikings against the Saints. The NFL tweaked its overtime rules, but the league needed an overhaul, not just a tweak. We’ll see if several deficient rules (they exist in the pros, not just college, as you can plainly see…) are amended to the extent they should be. 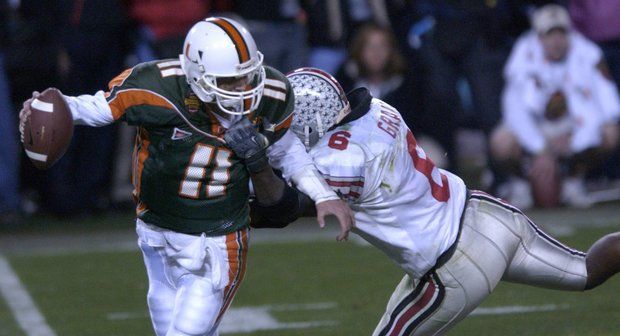 The overtime system used to decide a college football championship in the 2003 Fiesta Bowl is not perfect… but it beats the NFL anyday and twice on Sunday.

However, before college football fans get too cocky, their overtime system — while fundamentally fairer — is still not as good as it could be, either. Starting on the 25-yard line means an offense can gain zero yards and yet reasonably expect to score three points. College football’s overtime is the one that merely needs a tweak, not an overhaul, but that tweak — having possessions start at the 50, not the 25 — would force offenses to get at least one first down and very likely two in order to create points. This would represent a much truer test of football.

Let’s get your overtimes fixed, football… and neither side can claim to have everything figured out.

You’ve read all about college football tripping over itself by placing future semifinal games in the daytime hours on New Year’s Eve (when New Year’s Eve is a midweek day, not a weekend day). It has also been pointed out that this past bowl season, the Dec. 31 games could have been moved to Friday, Jan. 2, when a lot more people were taking the day off or would have been in a position to duck out of work for a long weekend. College football has scheduling problems that are clearly worse than anything the NFL faces. That’s obvious. Sorry, college football fans — the NFL does several things a lot better than your sport does.

However — to repeat our central theme — the NFL can’t fully separate itself from college football on this issue. The league committed a very simple and unforced error in Packers-Seahawks, and probably isn’t going to correct it, either.

Something that received only a small bit of attention on Sunday was the 12:05 p.m. local time start for the NFC title game. What was unique about that start time? Very simply, it was the earliest local time start for a home playoff game in Seahawk history. Without doing extensive research, it is very possible that the start time marks the only instance of a Seattle home game — regular season or postseason — beginning at any point before 1 p.m. local time.

The Packers plainly outplayed the Seahawks on Sunday and would have deserved to win had they won, full stop. If you’re a team with championship aspirations such as the Seahawks, you have no excuses if you come out flat (as the team did against Green Bay). However, can we acknowledge that if you’re a top seed in a bracketed tournament, you have earned more protections and advantages?

Nothing about the 12:05 p.m. start favored Seattle, the top seed. The game was a 2:05 p.m. start for the Packers’ body clocks — it was in their wheelhouse. Seattle’s normal routine of preparation did not exist, and athletes depend on rhythm. In that first hour of play — from 12:05 to 1:05 local time in Seattle — Green Bay completely dominated. Although the Packers remained in control of the game for another 90 minutes of real time, the post-1:05 p.m. portion of the game was played on even terms until the Seahawks stormed the palace gates in the final three minutes of regulation.

If a Pacific time zone team hosts the early conference championship game, you have to move that kickoff time to 1 p.m. local time and slot the late conference title game to 7:40 Eastern, 4:40 Pacific. Neither CBS nor FOX should mind.

College football fans and NFL fans love to say how superior their respective versions of football really are. The most recent NFC Championship Game showed us that these two forms of pigskin aren’t as dramatically different on a number of levels as many of us privately think.