After finishing either 7-6 or 6-7 in every season since 2011, Pittsburgh finally broke through last year. Sure, the 8-5 record doesn’t look like that big of an improvement on paper, but four of those losses were to ranked opponents, and three of them were by a touchdown or less. With a little bit of luck, the Panthers could have finished with 10 wins for just the second time since 1981.

Regardless, the question remains, “Will Pittsburgh win eight games in back-to-back seasons for the first time since 2008-10?”

There are plenty of reasons to think so. Sure, some people are upset about the departure of offensive coordinator Jim Chaney to Georgia. However, Matt Canada is a more-than-capable replacement, having put together some explosive units at North Carolina State, Indiana, and Northern Illinois – where the Huskies ranked 11th nationally in total offense in 2011.

Canada should have no trouble succeeding in Pittsburgh, as he inherits an offense loaded with talent. Quarterback Nathan Peterman is back to lead the offense after throwing for 2,287 yards and 20 TD’s last season. There’s also plenty of talent at running back with Qadree Ollison (1,121 yards, 11 TD’s, second-team All-ACC) and 2014 ACC Player of the Year James Conner (1,765 yards, 26 TD’s) coming back this fall. They’ll run behind a talented offensive line that includes second-team all-conference performers Adam Bisnowaty and Dorian Johnson.

On defense, the Panthers are equally loaded. Ejuan Price is back to anchor the front seven this fall, after ranking tenth nationally in sacks (12.5) and eighth in tackles for a loss (19.5) last year. There’s also plenty of experience at linebacker, with Matt Galambos (88 tackles, 10 TFL, 2 INT) and Mike Caprara (48 tackles, 9 TFL) returning. The secondary might be one of the best units in the conference this season, welcoming back Jordan Whitehead (108 tackles, 6 pbu, 1 INT, 1 forced fumble), Avonte Maddox (3 INT, 12 pbu), and Terrish Webb (4 career INT).

91 – The number of passes that Tyler Boyd caught last season. Make no mistake about it: Boyd was the Panthers’ go-to guy last year, catching over three times as many passes as the next closest receiver. With he and tight end J.P. Holtz heading to the NFL this fall, Pittsburgh loses 54.2% of its receptions from a year ago. If the Panthers are going to win the Coastal Division, they’ll need for a few players to step up and fill those enormous shoes.

36 – The number of sacks Pittsburgh recorded last year, the third-best total in the ACC. When Narduzzi took over as the head coach, people thought there was a typo in my article because I called him an “upgraddde”. That misspelling was intentional because I wanted to make it clear that he would bring a triple dose of defense when he arrived. That’s exactly what happened last year, as the Panthers recorded 87 tackles for a loss and 36 sacks. With seven starters returning from that stellar unit, there’s no reason to think that both of those numbers won’t improve in 2016.

3 Key Games That Will Make Or Break The Season

Why it Matters: This is one of college football’s oldest rivalries, dating all the way back to 1893. While these two teams haven’t played in 16 years, this meeting should be just as spirited as it has been in the past. A Pittsburgh victory wouldn’t just give the Panthers in-state bragging rights; it would also give them a leg up in recruiting since these schools recruit many of the same players.

Why it Matters: Had the Panthers won this contest last season, they would have played for the ACC Championship. Even though it’s just the first game of the conference slate, it could still ultimately determine who plays in the league title game this year. The Tar Heels return 14 players from last season’s Coastal Division championship squad — including Elijah Hood (1,463 yards rushing), Ryan Switzer (56 receptions, 708 yards), and M.J. Stewart (4 INT, 18 passes defensed) — which makes them a heavy favorite to repeat this fall. If Pittsburgh wants to win this division, it needs to get a “W” in Chapel Hill to start off conference play on the right foot.

Why it Matters: Under the leadership of new head coach Mark Richt, Miami will be a contender for the Coastal Division crown this season. That makes this game a “must win” contest for the Panthers if they want to earn a spot in the ACC Championship Game. Unfortunately, beating Miami has proved difficult over the years, as the ‘Canes have won 9 of the last 10 meetings dating back to 1998. However, it’s worth noting that the lone victory in that span was a 35-23 victory in Coral Gables back in 2014. 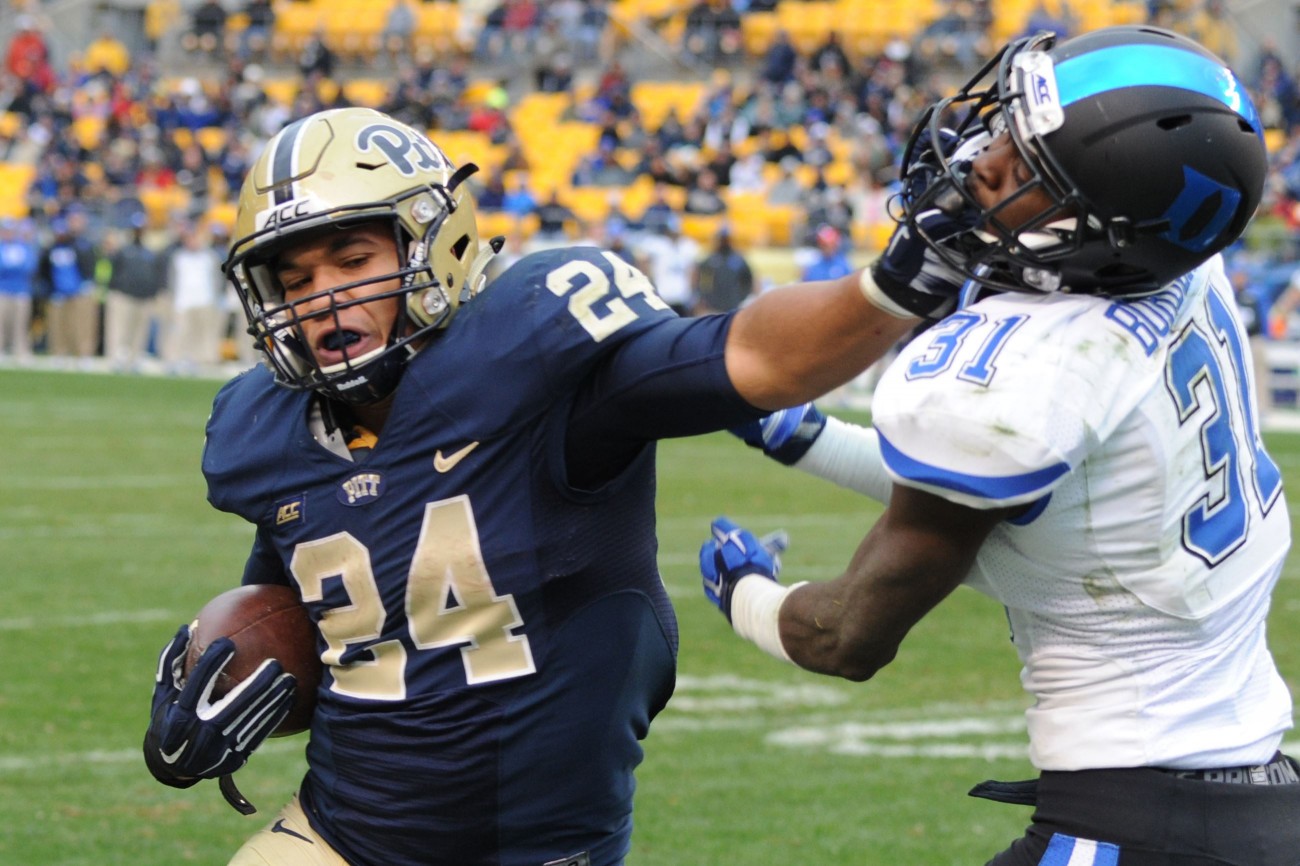 James Conner, RB – Conner earned ACC Player of the Year honors in 2014 after rushing for 1,765 yards and 26 TDs. Unfortunately, his season was cut short in 2015 due to an MCL injury against Youngstown State. Things got worse in December when he was diagnosed with Hodgkin’s lymphoma. Yet, being the fighter that he is, Conner is now cancer-free and is expected to be ready to go this fall. His presence in the lineup will make an already-talented Pittsburgh backfield even stronger.

Ejuan Price, DE – Price was one of the most disruptive players in college football last season, ranking in the top 10 nationally in both sacks (10th) and tackles for a loss (8th). He took his play to another level against ACC opponents, recording 8.5 of his 11.5 sacks and 16.0 of his 19.5 TFL in conference games. He’ll be the anchor of Pittsburgh’s pass rush again this fall, leading what should be one of the best units in the conference.

Nathan Peterman, QB – One of the most underrated quarterbacks in college football, Peterman had a great season for the Panthers, throwing for 2,287 yards and 20 TD’s, while adding another 232 yards on the ground. He was especially tough in the fourth quarter last year, connecting on 65.7% of his passes (24th in the nation) for 507 yards with 4 TDs and only 1 interception. Expect these numbers to be even better in Matt Canada’s system.

Jordan Whitehead, SS – Is there anything this guy can’t do? Earning the starting gig last season as a freshman, Whitehead led the team in tackles (108) and finished second in passes broken up (6). He also saw some time on offense, running 12 times for 122 yards and catching 2 passes for 10 yards. He’ll be a key player in a very active secondary that could be the best in the league this season. Don’t be surprised if he lines up at receiver from time-to-time as well.

This probably isn’t that bold of a prediction because Price is the only player that received a vote for Defensive Player of the Year in 2015 that returns this fall. Regardless, he will make the most of his extra year of eligibility and will continue to make tackles behind the line of scrimmage. As a result, he’ll earn the ACC’s highest honor for a defensive player.

4. Pittsburgh ranks in the top three in the conference in passing defense.

While it wasn’t exactly terrible last year, the Panther D did finish 11th in the league in passing defense. That won’t happen to a Pat Narduzzi-coached team in consecutive seasons. Expect this unit to finish in the top three in the league in passing defense this fall, thanks to a monster pass rush and a talented secondary that will be one of the better units in the ACC.

I realize that the Panthers are the favorite in this game, but it’s still a bold pick from a historical perspective. Although the all-time series is relatively close (PSU leads 50-42-4), the Nittany Lions have had the upper hand in the most recent meetings, winning seven of the last eight games. That trend won’t continue in 2016. Pittsburgh’s pass rush will be too much for Penn State‘s much-maligned offensive line — which allowed a whopping 39 sacks last year — to handle.

Although Pittsburgh loses two of its top targets and over half of its receptions this fall, the offense will improve under Canada’s leadership. As noted earlier in the preview, he’s produced some high-octane offenses in the past at North Carolina State, Indiana, and Northern Illinois — where his team ranked 11th nationally in total offense. Unlike some of his previous stops, he won’t have to do much rebuilding, as he inherits a veteran offensive line, a solid quarterback, and a backfield that’s absolutely loaded with talent. Look for the Panther offense to put up some big numbers this fall, which will put Canada in contention for the Broyles Award — presented annually to the nation’s top assistant coach.

Powered by a bruising running game, a fierce pass rush, and one of the best secondaries in the league, the Panthers will win at least eight games this season. If Pitt gets a “W” in either of the key conference games listed above, a ten-win campaign is well within reach.