After the 2010 season, rising coach Brady Hoke was hired away from San Diego State for his dream job at Michigan. In just two years, Hoke had taken a flailing Aztecs program and turned it into a respectable football team. After he left, many were nervous about the future of the program. Many were more concerned when Rocky Long, who did not leave the New Mexico Lobos in the best of shape a few years earlier (to say the least) was hired as his replacement.

In his five years as coach, Long has won (or shared) two Mountain West championships. This is far from an easy task in a conference that is routinely dominated by Boise State. Thanks to a favorable cross-division schedule, the Aztecs managed to run through the league undefeated and gritted out a tight 27-24 win over Air Force in the conference championship game.

Winning back-to-back titles is never easy. This will be doubly difficult for the Aztecs, who need to replace quarterback Maxwell Smith. Smith was not the best quarterback to play for San Diego State in recent years, but he got the job done. Christian Chapman took over at the end of the year, but there is no guarantee that he will start in 2016. What the Aztecs do have, returning, is the best running back that you’ve never heard of in Donnel Pumphrey. Pumphrey is a workhorse who will be drafted after his senior year, a great one of which could really help his stock

Of course, the biggest challenge to repeating is not necessarily in San Diego State’s hands. Boise State is still the class of the Mountain West. A mountain of dumb mistakes sunk the Broncos last year, but if they are on point, even the best San Diego State team might not be enough to beat them.

1977 – The last time the Aztecs had back-to-back 10-win seasons. Yep, it’s been almost four decades since the Aztecs posted double-digit wins in consecutive years. The last time was back-to-back 10-1 seasons in 1976 and 1977. The schedule shapes up with a real chance to do it again this year. That ’77 team ended the year ranked No. 16. Achieving that lofty ranking might be more difficult this year, but getting ten wins again would be historic nonetheless.

4,589 – Marshall Faulk’s career rushing yards. It is an iconic number in San Diego State history. Faulk is the school’s most illustrious football alumnus. He did amazing things in both college and the NFL. That number is about to be shattered by Donnel Pumphrey. Sure. Pumphrey has the benefit of a 12th regular-season game and of getting to count conference championship and bowl games. But he’s at 4,272 rushing yards heading into this season. Barring something catastrophic, Pumphrey is going to shatter that 4,589 number.

3 Key Games that Will Make or Break the Season

Why it Matters: Last year’s MWC season was an unmatchable success, but the nonconference schedule was an unmitigated disaster. The Aztecs suffered losses to Cal, South Alabama, and Penn State. The loss against Cal was by far the most embarrassing. The Aztecs came a long way in the final three months of the 2015 season. This game, against a power-conference team, will be the first — and biggest — chance to show that last season’s success was a product of improvement, not of facing weaker competition.

Why it Matters: The Aztecs once again draws a very easy cross-divisional schedule. They don’t play Air Force, Boise State, or New Mexico. Although Group of 5 conferences in general — and the Mountain West in particular — often see big swings in top teams from year to year, those squads are the likely top three in the Mountain Division. Fresno State should be the toughest divisional test for the Aztecs, and a victory here would go a long way towards earning the West Division crown.

Why it Matters: This should be San Diego State’s toughest cross-divisional game. A win over Fresno State would give the team a leg up in the West Division race, but wins against Fresno and Utah State would all but lock up the division title. There isn’t much more on the Aztecs’ schedule by way of meaningful games, other than a revenge match against South Alabama. The goals of ten wins and a national ranking run through winning the Mountain West. These last two games are the ones that can ensure that. 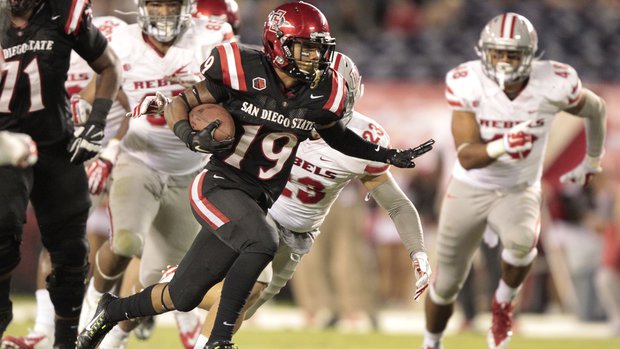 Donell Pumphrey, RB — As Pumphrey goes, this team’s offense will go. Yes, the Aztecs will have a massive offensive line and a decent passing game, assuming they will find a decent game-managing quarterback. But Pumphrey will be the biggest key. He is a quick and powerful runner who can get himself into the open field and then break-away once he’s there. He averaged 5.35 yards per carry last year and protects the football, only losing two fumbles on over 300 carries. He is what the offense is based around.

Christian Chapman, QB — Like I said before, there’s no guarantee he’s the starter. He is likely to be the starter, though, and took over for Maxwell Smith at the end of last year. He can be efficient, which is all that San Diego State needs. The Aztecs have a good defense (more on that later), a massive offensive line, and a dynamic running back. But, they reaally need a game manager at quarterback. If Chapman does an efficient job, San Diego State will have an efficient team on both sides of the ball.

Calvin Munson, LB — The Aztecs have an incredibly deep group of linebackers. It’s almost ridiculous. They have four or five guys who can start on any Group of 5 roster and as well as a number of Power 5 rosters. They are led by the senior Munson, though, who had 9.5 sacks last year and 15 tackles for loss. There are enough linebackers on this team for Munson to not have to play too many downs,. However, whenever he is on the field, he is a force on defense.

Damontae Kazee, CB — Kazee is a lockdown corner. He leads all returning starters from last year with 66.5 tackles, while adding eight interceptions, and seven pass breakups. He is a solid corner who could easily play at the Power 5 level and will probably get a chance at the NFL level after this season.

5. San Diego State will have multiple picks in next year’s draft

By multiple, I don’t just mean two. Pumphrey will make an NFL roster, but there will be a bunch of others on mock draft boards all season. Munson, Kazee, a few other linebackers, and maybe some of those massive offensive lineman will be given a chance by the NFL. I’m not sure quite how many will be drafted, but there will be at least three Aztecs heading to the NFL in 2017, and possibly more than that.

4. The Aztecs will win the West Division with ease

This prediction is not particularly bold. San Diego State is the class of the Mountain West Conference’s West Division and will show it again this year. This is one of the top Group of 5 teams and no one in the West can hang with them. Winning the conference title, especially if Boise State is its opponent in the championship game, might be too tall of an order.

3. The Aztecs will win ten games

I mentioned above that San Diego State is seeking its first back-to-back 10-win seasons in almost four decades. The Aztecs will reach that goal this year, going 8-0 in Mountain West play and beating New Hampshire and South Alabama (at least) in nonconference play to post a 10-2 regular season record. They might lose the MWC championship game and their bowl game, but this season will be historic nonetheless.

2. Donell Pumphrey will be a Doak Walker Award semifinalist

The running back class this season is loaded, to say the least. There are big-name hype machines all over the place that will clutter up award watch lists. The likes of Leonard Fournette, Dalvin Cook, Jalen Hurd, Christian McCaffrey, Corey Clement, Curtis Samuel, and Royce Freeman, among many others, will not leave much space for the unheard ofs to shine. But Pumphrey will. He will surprise everyone by putting up better stats than many of those hyped players and he will be on some late-season watch lists that no one will see coming.

1. The Aztecs can make a New Years’ Six Bowl, if Houston falters

The AAC is the class of the Group of 5 right now and everyone expects Houston to run away with that Go5 NY6 bid (if they don’t make the College Football Playoff). But if Houston doesn’t live up to expectations or doesn’t win the AAC, the Mountain West winner will be next in line for that coveted major bowl slot. If SDSU can beat Boise State (most likely) for the MWC title, I could definitely see the Aztecs playing in an NY6 bowl.