A person named Booth hasn’t received this much publicity for his shooting since April of 1865.

If you had taken a poll of Villanova fans, coaches, students, support staff, sports information employees, priests, or members of the 1985 championship team — anyone — before Monday night’s championship game, and you had asked them which player would score the most points for the Wildcats, Phil Booth wouldn’t have made the top five.

Booth? He toted a 6.7 points-per-game average into NRG Stadium before tip-off on Monday night. The sophomore guard was part of Villanova’s waves of relentless defense in this tournament, but he wasn’t a part of the offense — not enough of one to count, at any rate.

In the South Regional in Louisville, while Villanova tore through Miami and outlasted Kansas, Booth scored a total of two points. He helped the cause with his defense, but he didn’t stay on the floor for a particularly prolonged period of time: 12 minutes against Kansas, 14 against The U. He was very much a player in the shadows coming into this game…

Just like the man who turned last year’s NCAA Tournament national championship game on a dime. 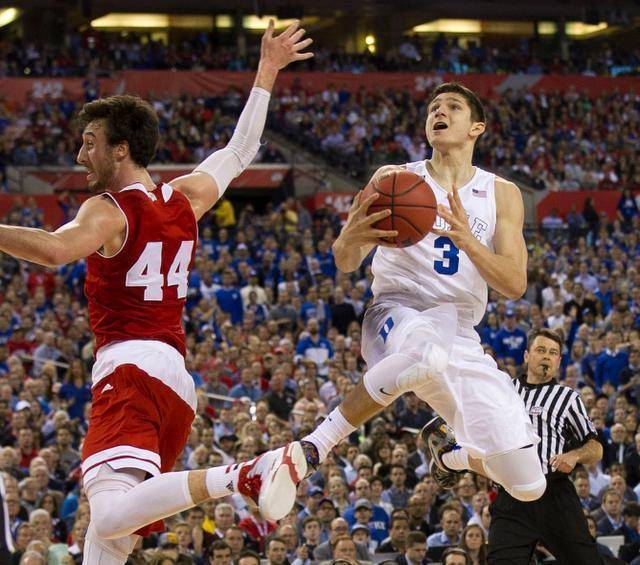 Before the internet uncreatively likened him to Ted Cruz in virtually every other tweet — much as the internet uncreatively put Michael Jordan’s crying face into our timelines in every other tweet after North Carolina lost (SIDE NOTE: A CLASSIC GAME JUST ENDED! WHY IS YOUR FIRST THOUGHT TO PHOTOSHOP AN IMAGE INTO A PICTURE AND TWEET IT? THIS IS WHY OUR COUNTRY IS LOST… had to get that out of my system…) — Duke’s Grayson Allen was a national championship game hero.

Last year, Wisconsin forged that nine-point lead over Duke midway through the second half. The Badgers were on the verge of winning their first title since 1941. Then came Allen’s flurry of points from various spots on the floor. Allen finished with 16 points, 12 above his meager average. Wisconsin couldn’t have anticipated that a player would emerge from relative obscurity to torch the Badgers in the game’s most important moments. From the pressure of the moment — which is more acutely felt by the stars and frontline players — guys such as Grayson Allen can (and do) feel they have nothing to lose. They play freely. The scouting report on them is not as established. They hit a few shots.

The good feeling never really ends… all the way to a national title.

This was Allen — 12 points above his average — last year against Wisconsin.

This was Booth — 13 points above his average — Monday night against North Carolina.

This was not, moreover, a pedestrian 20-point outing. Booth hit tough shots and he scored from various places on the floor, just as Allen did.

Before Marcus Paige and then teammate Kris Jenkins hit the two most iconic shots of the night — and of the now-concluded college basketball season — Booth hit this extremely difficult shot with the shot clock about to expire:

Get your Phil of #ONIONS, Mr. Booth.

This is Tuesday, April 5, the day of the series finale of American Crime Story: The People vs. O.J. Simpson.

Ladies and gentlemen of the jury, let it be known that Phil Booth took 13 shots Monday night in Houston. Of those 13 shots, only one did not go through the basket: 6 of 7 from the field (2-2 on threes), 6 of 6 from the free throw line. That’s 13 attempts, 12 makes.

You must find Phil Booth guilty of shooting North Carolina repeatedly, the most devastating shots by a Booth in the month of April in 151 years.

When Villanova won its first national championship 31 years ago against Georgetown, the Wildcats memorably hit 78.6 percent of their shots. A 6-of-7 shooting line from the field, 12 of 13 overall with foul shots included, represented Phil Booth’s imperfectly perfect tribute to the 1985 champions.

It’s a tribute which gave Villanova another trophy to accompany that 1985 piece of hardware.

The trophy case — or Booth, if you prefer — just got larger in Philadelphia.