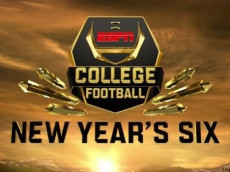 College football has 40 scheduled FBS Bowl Games this year, with a National Championship Game to follow them all. Additionally, starting last year, ESPN put together a “HBCU National Championship” called the Celebration Bowl, to be contested between the champions of the two HBCU conferences. It’s not an FBS Bowl, though, so it won’t be ranked […] 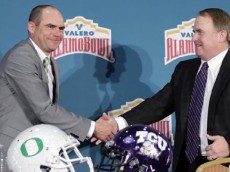 Mark Helfrich is not a bad coach because his Oregon Ducks blew a 31-0 halftime lead to the TCU Horned Frogs in this past Saturday’s Alamo Bowl. Helfrich isn’t a bad coach, period. He helped rescue Oregon’s season, which appeared to be headed off a cliff at one point but became (in its regular-season incarnation) […] 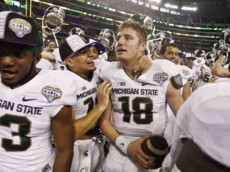 Sometimes, the winning team represents the major story in a sporting event. Sometimes, the losing team becomes the central story. Sometimes, the margin of victory rightly grabs a banner headline. Sometimes, the flow of the game — accompanied by a deceiving final score — earns extra notice. How did the 38 bowls shape the storylines […] 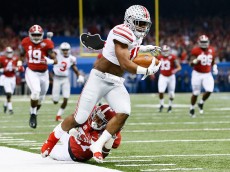 Before the bowls, we explored the idea of which games meant more to each team; which games mattered to one team in particular; and which games were going to be more central as revealers of conference strength. Now that the bowls are over, though, there’s another exercise to engage in — judging the bowls based […] 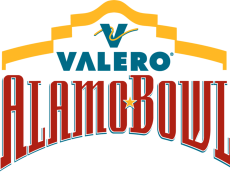 You’ve probably heard something about the Jim Mora-Bill Snyder episode at the end of the Alamo Bowl on Friday, won by UCLA over Kansas State. Here are the three relevant images from that larger drama. The play which angered Mora: The first blow-by handshake from Mora: Then, the circle-back reunion with Snyder, involving a longer […] 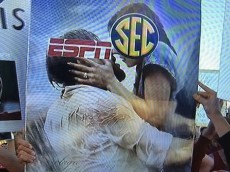 Linking conference strength to bowl results is always a tenuous, risky thing to do — it can be done, but it requires great care and an awareness of limitations. The reasons for being cautious about touting — or downgrading — a conference based on bowl performance are obvious. They do, however, demand some care and […]

The announcement of the first College Football Playoff standings created a lot of stories — more than many of us in the college football community were ready to expect. Let’s give you a brief overview of the top stories that emerged from the playoff announcement and then the completion of the 38-game bowl schedule (the […] 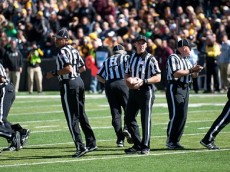 Officiating college football is a much tougher job than it used to be. The speed and power of the athletes have increased, but the speed of the game has increased as well. Faster athletes running hurry-up-no-huddle offenses with spread formations and more downfield passes make life a lot harder for the on-field arbiters of college […]