Maybe I’m old fashioned but I’m still trying to figure out this whole social media thing, and I think Georgia Tech might be in the same boat. The Jackets have launched a promotion asking their fans to “tweet, tag or post with #togetherweswarm”. The more posts the hashtag gets, the cheaper tickets will be for the Georgia Tech/Miami game on October 4. 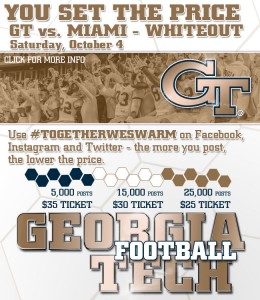 On one hand, this is kind of creative. On the other hand, outside of Clemson this is the best game on Tech’s home schedule this season. This should be an easy ticket to sell.

Sure, Georgia Tech is just 1-5 against Miami under Paul Johnson with the lone win coming in Johnson’s debut season, but that should fuel the fire and not extinguish it. The last time Miami came to the Flats, the Canes rallied from 17 points down to knock off the Jackets in overtime. This is a game Tech fans should be lining up for to cheer their team to victory.

The social media plan is intriguing, but if you have to try this hard to sell tickets for one of the best games on your home schedule, you might not be spending your time in the right place.

h/t Get the Picture