Appalachian State football has had a lot of great moments on the field.

How can we forget the greatest upset of all-time in 2007 when the Mountaineers went to Michigan Stadium and stole the soul of a championship-caliber team when Corey Lynch blocked a 36-yard field goal attempt with six seconds left on the clock.

What people don’t remember is that the victory set the tone for the final leg of what was the first ever FCS Championship three-peat. Also lost in the shuffle is 12 Southern Conference Championships under legendary coach Jerry Moore, who led Appalachian State to 242 wins in his College Hall of Fame career.

Despite the successful history of Mountaineer football, Scott Satterfield was questioned as the next head coach to lead the program after being hired permanently in 2013. The former quarterback under Moore struggled in his first year, going 1-6 to start the season.

People doubted that Appalachian State could make a smooth transition to the FBS. After all, it’s not an easy task. As Richard Walker of the Gaston Gazette pointed out last November, only six programs that have made the transition from FCS to FBS have winning records — Boise State, Connecticut, Florida International, Louisiana Tech, Marshall, and South Florida.

After 24 games, the Mountaineers are 18-7, fresh off their first bowl appearance and looking for their first conference title.

Offensively, they have the best tools in the conference. The group that led the league in total offense returns running back Marcus Cox, who finished in the top 20 in the nation in rushing yards and carries per game.

Behind center is one of the most dangerous Group of Five quarterbacks in the country. Taylor Lamb is the perfect pro-style thrower in this offense, because he has the agility to make things happen inside and out of the pocket. He’s protected by four returning starters on the offensive line and will be running Scott Satterfield’s offense for a third straight year.

On defense, coordinator Nate Woody returns nine starters, including what many believe to be the best linebacking corps in the conference — led by top tackler Eric Boggs. Fellow interior linebacker and All-Conference star John Law also returns to supplement a secondary that welcomes back all but one starter from a year ago.

The biggest adjustment will be replacing defensive end Ronald Blair, who led the team in sacks for two straight seasons. While it’s a major loss for Woody’s defense, it’s important to remember that his scheme will still be able to create plenty of pressure with two returning starters up front and four starters at linebacker that fuel the edge rush in the 3-4 defensive scheme.

Overall, the Mountaineers finished 11th in total defense in 2015 — allowing less than five yards per play and 315 total yards per game.

83.3 — The percentage of passes that Taylor Lamb completed inside the red zone last year. What makes the Appalachian State offense so dangerous is its big play ability in the passing game and top-level rushing attack. That will continue again this fall with Taylor Lamb, Marcus Cox and four starters on the offensive line returning. Yet, what wins championships is the ability to get points in the red zone. Lamb was the best quarterback in the Sun Belt in these situations last year, completing 25 of 30 passes (83.3%) with an amazing 17/0 TD-to-INT ratio.

79 — This is the percentage of sacks that return to the Mountaineer defense despite the loss of Ronald Blair. In 2015, nearly 50 percent of the team’s sacks came from the linebacker position. This stat ought to dispel the myth that the Mountaineers won’t be able to create any pressure without their stud defensive end, who now plays for the San Francisco 49ers.

Why it matters: The first conference road game of the season comes against one of the up and comers in the Sun Belt.

The Ragin’ Cajuns went under .500 last season and got destroyed by the Mountaineers. Yet, they look vastly improved under Mark Hudspeth and should be better defensively under second-year coordinator Melvin Smith.

The App State defense will also have to stop Elijah McGuire, who is as dynamic of a runner and receiver, as anyone they’ll see in conference play.

Why it matters: As Kevin Causey penned earlier in our top 50 countdown, Georgia Southern should be considered at least at some level, as a contender in the Sun Belt Conference.

Facing the Eagles, no matter what their record will be by late October, is a schematic mess. Quarterbacks Favian Upshaw and Kevin Ellison are both as dangerous on the ground, while trying to stop Matt Breida at running back is a daunting task.

This game is a must-win, especially if Georgia Southern beats conference favorite Arkansas State earlier in the month.

The Mountaineers are 7-1 in conference road games since joining the Sun Belt in 2014. That only loss was to Georgia Southern in 2014.

Why it matters: If quarterback Brandon Silvers is on, the Trojans are one of the most dangerous teams in the conference. If not, things can get really ugly.

What makes this game important is the Mountaineers avenging a poor showing at home last season.

Appalachian State escaped on a 24-yard field goal from Zach Matics after stopping a shovel pass attempt on fourth-and-one from the field goal formation.

If the Mountaineers want to contend as champions in 2016, they can’t give up 41 points to an air-raid offense that plays into their defensive strengths.

Getting an emphatic win at this point of the schedule, against a team that embarrassed them in the past, will only mean an easier road against UL-Monroe and at New Mexico State to end the season. 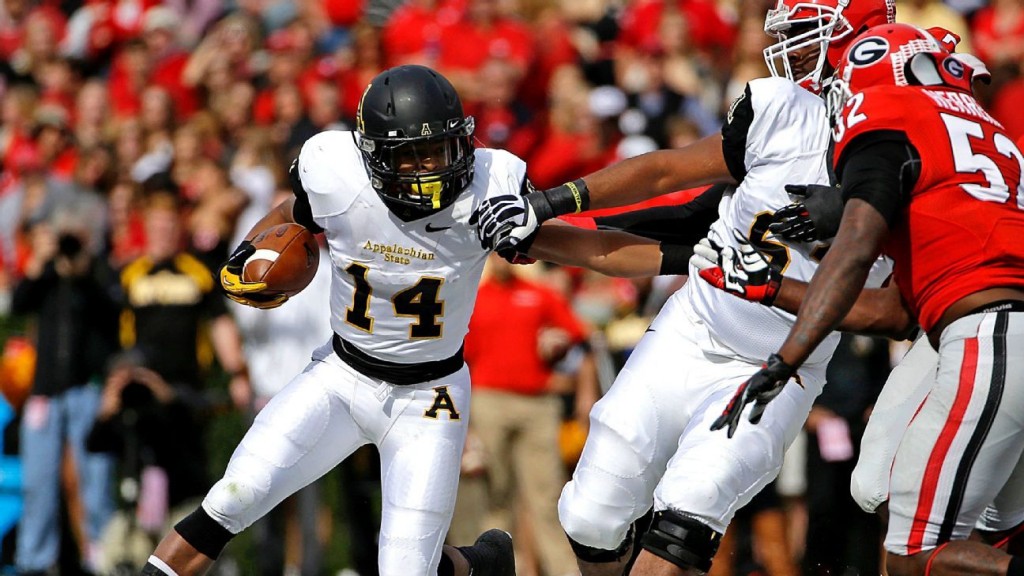 Marcus Cox, RB – The senior slasher might only be 5’10” and 185 pounds, but he’s the most dangerous all-around play maker in the Sun Belt. As a junior, he rushed for 100 or more yards in eight of Appalachian State’s 13 games. He shined the most at the end of the season, rushing for 354 yards combined against South Alabama and Ohio to end the year. Look for head coach Scott Satterfield to get him more involved in the passing game in 2016.

Taylor Lamb, QB – At the end of the year, we might be talking about Lamb as the most underrated quarterback in college football. All it will take is a major win against a conference favorite in the non-conference schedule. Lamb has the poise you need to win close ballgames and doesn’t make mistakes in enemy territory.

John Law, ILB – You know you’re a beast when you wear #88 and are lining up behind the defensive line. John Law has a tight end’s body at linebacker and lets offenses know of his presence in both the running and passing game. Running backs fear his impeccable form, yet punishing tackling style. Quarterbacks fear his hands as a roving coverage back just as much as his blitzing ability. There aren’t many players on either side of the ball that are as physically gifted as Law in the Sun Belt Conference.

Latrell Gibbs, CB – The junior is one of the best in the conference at reading routes and jumping them before the ball is delivered. What sets him apart is his one-on-one coverage in the passing game. The “Legion of Boone” has harder hitters in Tae Hayes and Alex Gray, but the lynch pin is Gibbs — who had seven interceptions in 2015. Most of those came from jumping lanes in one-on-one situations or being in the right place at the right time. That being said, Gibbs is as athletic as any player in the secondary and is versatile in his own right.

5. The Mountaineers will finish with more wins than any other major program in North Carolina

North Carolina is coming off one of its best seasons to date and is ranked by nearly every preseason publication as a top 25 team.

TSS Associate Editor Terry Johnson made a strong case for why college football fans need to pay attention to the Duke Blue Devils to open up our Top 50 Preview series.

Nobody knows where NC State and Wake Forest stand heading into 2016.

For comparison, The Tar Heels will face Georgia, Illinois, James Madison and The Citadel.

If the Mountaineers can steal one against Miami at home early in the season, there’s no doubt they’ll post double digit wins for the second straight year.

That should be the best win total of all the major teams in the state.

4. The Appalachian State secondary will finish the season as a top 10 passing defense

The Mountaineers finished 14th nationally in this category in 2015, giving up under 183 yards per game in the air.

This secondary and linebacking corps are just too good to allow quarterbacks to be able to pick apart the defense. A lot of signal callers will be forced to make bad decisions by linebacker and defensive back blitz packages, while trying to find receivers against a secondary unit that finished 12th in the country in interceptions a year ago. The Mountaineers gave up just 10 passing touchdowns a year ago — which was a top five showing across the nation.

Option teams, aerial attacks, pro style offenses — they all have to be prepared for the versatile attack of Latrell Gibbs, Tae Hayes, and Alex Gray — who led the secondary in tackles a year ago.

3. Marcus Cox will finish in the top ten in the nation in total rushing yards

This might be the boldest prediction to make, considering fellow backs Jalin Moore and Terrence Upshaw have proven as youngsters that they deserve an increase in carries heading into their sophomore and junior seasons. Both had over 80 carries in 2015

Cox finished last season with 1,423 yards rushing, but missed a game against Idaho, which might have put him in the top 15 a year ago.

He also received 16 or less carries in four games.

2. Taylor Lamb will break his own single-season touchdown record

Thirty one touchdowns. Zero mistakes inside the opponent 20 yard line. How in the heck do you improve on a stat line that includes an impressive 8.4 yards per attempt?

Despite losing three top receivers, look for Lamb to improve on his 60% completion percentage in 2016, creating more opportunities for big plays.

Also, look for Scott Satterfield to open up the passing playbook, especially in scoring territory. The Mountaineers only attempted 22.8 passes per game last season, which ranked 118th out of 128 in FBS football last season.

The time is now for the Mountaineers. And no, I don’t say that tongue in cheek, with Sun Belt Favorite Arkansas State not on the 2016 schedule.

Over the last 21 games, Appalachian State is 19-2. They have gone far beyond what anyone predicted from them in their jump to the highest level of college football competition.

The only thing this group has left to accomplish is going from Southern Conference recruits, to Sun Belt Conference Champions.

This is the year that the Appalachian State football program cements itself as a perennial Sun Belt power for years to come.