Like peering off into the distance and seeing the clouds whir by with a black sky on the horizon, sometimes, things are just easy to see coming. So you get that lawn cut just a little quicker than you otherwise would.

When the College Football Playoff was created and eventually saw its broadcast rights bid for and won by ESPN, you knew we’d be getting here eventually … collusion, or the idea that such a thing might exist.

Bo Pelini, the Nebraska Cornhuskers’ head coach, has never been accused of not being forthright with his thoughts. Credit him for doing so, but he lobbed the first College Football Playoff political haymaker only a week and a half in advance of election day.

By now, it’s made the rounds … Pelini’s commentary that the marriage betwixt ESPN and the SEC is not good for college football. Here’s the rub: he’s right, and there is hope, if faint, that maybe it won’t matter that he’s right.

Those that suggest ESPN and the SEC are not bedfellows … that it’s all rather something tin foil hat X-File folks come up with because they need an excuse as to why the SEC keeps winning and their teams do not … are not necessarily playing with a full deck.

ESPN owns 80 percent of the SEC Network (Hearst Corporation with the last 20). That figure is far and away the highest percentage of conference network rights to one outside entity. By comparison, the Big Ten Network (for sake of argument since Bo made it for me) is 49 percent the Big Ten Conference and 51 percent Fox Sports-owned.

If you don’t think it’s within ESPN’s best interest to promote the SEC, please show yourself to the door. The sign reads “Common sense only allowed ’round these parts.”

If you think that while it may be within ESPN’s best interest to promote the SEC, the network shies away from promotion and the SEC does Bristol’s job with its level of play on the field, go to the wash room. No way you can have your head that far into the sand without getting some in your ears.

ESPN not promoting the SEC would be incredibly shortsighted and fiscally idiotic, if nothing else. When 80 percent of that network is owned by you, your best interest is to get that network as many eyeballs, advertisements, and prime coverage situations you possibly can. Which is what ESPN does.

The wider-range issue is the strangling monopoly ESPN has on the sports industry, which isn’t really its own fault so much as a fault of the viewer for sitting around complaining about it but never going to find something else. For instance, I haven’t personally watched College GameDay in, at minimum, 10 years. It’s junk which adds nothing of value to my day, so I put it with whatever programming is on the Lifetime channel at the time, which also adds no value to my day.

But we’re getting off track here. If the biggest games and the highest ranked teams are, for instance, in Pelini’s Big Ten, the main beneficiary of that is obviously the conference and Fox Sports. Why? Because there’s a trickle-down effect. Even if, say, the main Big Ten game between title contenders always finds its way on ESPN or ABC, the trickle-down effect is that games pertaining to the remaining conference teams are a little more important.

When you cannot fill all of those time slots with six great Big Ten games, boom, the rest of the inventory goes to BTN. This takes eyeballs away from any property the SEC owns and gives it to Fox, a direct competitor. This is elementary stuff.

Why it’s bad for college football, as Pelini so astutely states, is that with one media property holding so much influence over a product that historically chooses its champions by nothing more than influence and opinion, the integrity gets muddled. Hell, with all the attention paid to the SEC, you’re liable sometimes to not even know other conferences exist some Saturdays if you feed yourself only ESPN-commentary fare.

Immediately, rather than tackling Pelini’s comments to see if they have merit, it was “attack the source, because we cannot attack the opinion.” John Kincade, an ESPN radio host based in Atlanta, took to Twitter with an all too common media practice these days of making a one-liner and having other media re-tweet it and pat them on the back for it as “clever,” because no one loves media quite like other media.

“The Cornhuskers have been bad for college football,” it read. It’s a wonder he didn’t have a team of writers in the back coming up with such a sage quip.

Think about it for a second: ESPN owns the CFB Playoff broadcast rights; ESPN owns 80 percent of the SEC Network; ESPN is the main influencing voice in the room for media types who vote in things like the AP poll, both from a broadcast perspective and an opinion-based one; what would benefit ESPN the most? Why, more teams in the CFB Playoff from the network’s cash cow, the SEC.

There is hope, albeit hope we’re just assuming. And it is this:

The CFB Playoff committee is charged with thinking independently… of ESPN and other media outlets with vested interests. Whether it happens or not, I suppose we’ll be finding out within seven calendar days. There will be much kvetching either way — on that much, you can put a 10-percent home down payment.

It’s impossible, really, to understand how each playoff committee member views the games, how much each person weighs sterile numbers as opposed to the sometimes cloudy, sometimes 20/20 “eye test,” or how predetermined biases play into their decision making.

With those predetermined biases (because we all have them, every day, the second we get out of bed until the moment we lie down for the night), how are they gained … through the informational influence of others like media or something else?

Yet, isn’t this even a talking point because the SEC wins? Seven BCS titles in a row, and all of that? Well, let’s suppose there was a scenario where there was a conference that had more bowl teams, more top-10 wins (4-1), fewer teams with a losing record (3-4), an unbeaten record in BCS bowls versus a winless one (2-0), and a win head to head against the SEC’s champion in the BCS title game? Wouldn’t one expect that narrative to change?

That scenario above speaks for what the ACC actually did versus the SEC last year. Nothing really has been changed from a narrative point of view. The game is a beautifully orchestrated scheme that we see every year, and it’s not really Black Helicopter stuff more than just solid usage of fiscal common sense. 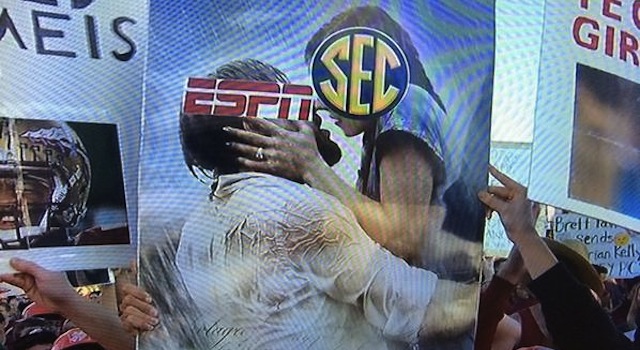 It’s no idle coincidence that this sign — a pointed commentary about the relationship between ESPN and the SEC — was displayed at Florida State University, the national champion of college football and a member of the ACC. If the ACC’s recent achievements had occurred under the banner of the SEC, everyone knows they would have received far more publicity… because it would have made good business sense for ESPN.

See how this works? You can’t ever fall too far down, and you’ve created a system where even in the event of a surprise team winning the conference from out of nowhere, the mechanism is in place to shoot up the polls based on beating “highly ranked” teams.

That’s how college football has always worked, where the big names get the advantage of a high preseason ranking, and anyone that beats them “must be good because they beat a ranked team!” and shoots up the polls.

The seven BCS titles in a row is solid, but not everyone is getting a fair chance to play. Oklahoma State in 2011 was well chronicled as having won more games over ranked teams than Alabama and having played an overall more difficult schedule … but was left out. When you’re getting a free pass for one and sometimes two spots in a two team tournament, odds are you’re going to win a lot of them, even seven straight.

What it all amounts to is obvious distrust among fans, but especially among coaches. If Pelini is saying this outright to the media, you know it’s been discussed at length by coaches who sought validation for the opinion before bringing it to the public.

It’s probably more than just Pelini or Bob Stoops, but they’re willing to come out and say it. Again, it’s correct.

The question is: Where does it all end?

At what point is it enough or (worse) damaging to the sport? ESPN’s bottom line will always need a new sized belt as long as there is no competition for it, and considering the prices ESPN puts forth in its bids on major events, that isn’t coming any time soon.

Yet, no matter how strong or powerful anything else is in sports, fans tune out when they feel either injustice or no reason to pay attention because their team has no shot.

Baseball, once the most powerful sport in the country, is an example of this. Yes, the strikes and steroid era wreaked havoc on the perception of the game, but the salary cap and idea that unless you root for certain teams, yours has to work 10 times harder and be 10 times better in the front office to compete saps fan interest as well.

Moreover, even though it’s not true and baseball actually has had a more diverse championship winning group than the NFL over the last 15 years for the most part, the NFL thrives on the idea of parity and that every fan base has a chance because that’s how it’s set up.

Small markets in football win fairly routinely, whereas in baseball, while the championships are seeping with diversity, the market size isn’t.

Apathy can kill a sport, and college football isn’t immune if all we see is the funneling of SEC teams into the playoffs and a perception that the rest of the conferences are just playing for two spots per year in a loaded system catered to one region of the nation.

Teams like Minnesota … 6-1 with only a loss to TCU … have fan bases that sit there knowing that even if they run the table, they probably have no shot at playing for a title. Minnesota is in a Power 5 conference, albeit not a big name. There is even some thought that maybe Nebraska, as a 1-loss team, might not be able to rise up the rankings fast enough to get there, hence Pelini’s consternation.

Slowly but surely, as more fan bases feel squeezed out of an opportunity, they’ll pay a little less attention.

In the end, it will be up to the CFB Playoff Committee to navigate this brewing storm and make its opinions independently of anyone else, thereby creating a system that is high on inclusion and low on guaranteed spots based on region or team name.

Fans can hope. Apparently, so can coaches from Nebraska.