There are things that will be endlessly debated: Bud, Miller, or Coors; is Bigfoot real or not; Coke or Pepsi; Scott Stapp or nails on a chalk board; and of course, playoffs in college football.

Questions will always exist about whether or not a playoff in college football devalues the regular season. To Mathletes, putting “more teams in means more teams have a shot which means it doesn’t devalue the regular season.” For people erring more on the side of common sense, “allowing teams to make more mistakes and still play for a title” means less emphasis is placed on NEEDING to win every week.

Cue Nick Saban, whose every comment is either loathed or deified depending on who is reading it.

Saban referred to playing in the Sugar Bowl against Oklahoma … which at times looked like Oklahoma practicing in shorts and shells … as having to “convince the team to play in a consolation game.”

I think we all know and understand that the CFB Playoff will essentially neuter the importance of higher-tier bowl games and rob them of their long-standing tradition as being season-ending destinations.

And we always probably wonder what the mindsets are of certain teams entering these games. Yes, they’re big games, but they’re all teasers or appetizers to what’s billed as the real meal, the BCS championship game or in this case, the CFB playoff championship game.

Fans troll message boards with things like “our team wasn’t motivated” or “they were disappointed in being there,” but you never really know if that’s the case or if the other team was just better and more prepared.

Saban isn’t likely the first to run into this situation. Hell, Ohio State last year was a win away from playing in a national championship too and ended up in a BCS game, losing to Clemson. Were the Buckeyes feeling all “consolation-y” about it? Michigan in 2006 also comes to mind. Granted, good teams get up no matter what and understand the unique opportunity not afforded to many, but this isn’t the first or the last time we’ll have heard the murmurs of a lack of motivation. 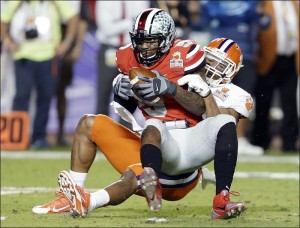 While fans will never know if motivation and unmet goals factor into performances, the fact remains that using the excuse smacks of poor mental strength.

But Saban’s comments shift from his narrative after Alabama had accepted the invitation last December. Then it was about playing for the seniors and finding out what type of team you have.

Bob Stoops fired back because Bob Stoops is awesome at not giving the droll company line by noting that his teams have played for championships, and that getting up for games that are not of that ilk has never been a problem.

The truth is a few things here:

1. If your team cannot get up for a BCS (now New Year’s Day) bowl game, it probably wasn’t all that great or mentally tough to begin with, and part of being an elite team is being both of those things, championship game participant or not.

2. College football has over-sold the singular championship game as so definite that nothing else matters, and sometimes that seeps into the minds of players.

This is the biggest problem with the CFB Playoff. We’ll get no more clarity on who “should” win a championship. All we do is guard against 2004 Auburn happening again, which is great in the rare year that it’s needed, but is being force fed as though that’s every season.

If players are seeing that one-game goal as that important and anything less isn’t worth showing up for, that’s a problem, both with your team and the system. To be successful at anything, you need a measured amount of amnesia.

And that amnesia means forgetting success just as easily as failure. Doting on past accomplishments and walking around feeling like the next experience is beneath you is a character flaw that gets exposed in competition.

Oklahoma was better than Alabama, and that’s why Oklahoma beat Alabama. It’s pretty much as simple as that. On that particular night, one team was better than the other, and in college football that means something .

If Oklahoma was better in part because Alabama thinks playing in that game was beneath its expectations (and it couldn’t get up for it), that still makes Oklahoma the better team, especially above the neck. Both programs walk into every year expecting championships.

The real disappointment here is that a grand game like the Sugar Bowl is now viewed as going out to the bar with your buddy, his wife, and their 11 p.m. self-imposed curfew.

Everyone can shout from the mountaintops about how great a CFB Playoff will be, but as with most things, the cost is never really calculated. The cost here is some of the excitement college football bowl season used to provide and the destination the larger bowls felt like.

College football is robbing Peter to pay Paul with all of these system changes, and the Pandora’s Box of “not motivated to play here” is a tough one to ever get closed, perceived or real.