You’re going to read a lot more about week one of the new college football season in the coming days at The Student Section. After eight months of speculation, live games have returned to our world, and the annual vastness of the offseason makes week one feel like a sensory overload. You’ll get plenty of perspective on the full national scene, but for now, just absorb this one basic point about the first week of this — and every — college football season:

The object is to win, ideally without getting hurt. If you do that, you can work through your issues and limitations. You can teach young players what to do better. You can get the attention of your veterans, perhaps shaking them loose from a complacency or an overconfidence that might have set in over the summer. If a bunch of 19- and 20-year-old male members of the human species were surprised by what they saw — gee, imagine that! — coaching staffs can pull them together and reorient them in the weeks to come, especially if week two involves a bye or a cupcake game.

Just win — that’s the week-one mantra for every team that owns legitimate championship aspirations in their division, conference, or the nation at large.

On Saturday, we saw two neutral-site dome duels turn into much tougher contests than most people expected. As Bart Doan wrote about in the afternoon, West Virginia played commendably against Alabama in Atlanta before coming up short.  Had the Mountaineers’ receivers not dropped (unofficially) 11 million red-zone passes, West Virginia might have won.

For the Oklahoma State Cowboys — up against the Florida State Seminoles in Arlington, Tex. — the story of their close-but-not-quite performance is achingly similar. A Big 12 school pushed a national power to the limit, but it couldn’t close the sale because it couldn’t secure the pigskin on multiple occasions.

Two plays overshadowed all others in JerryWorld on Saturday night. First, Oklahoma State defensive end Emmanuel Ogbah (pictured in the cover photo, above) dropped a can-of-corn interception with his team trailing, 20-17. The interception could have been a pick-six. At the very least, it would have taken the ball into the Florida State red zone. Given that the Cowboys never quite held a knife to FSU’s throat — in other words, had the ball in scoring position with a chance to take the lead — that was as close as they came.

The other instance arrived one quarter later.

With Florida State leading by six, 30-24, and with only 4:41 left in the fourth quarter, Oklahoma State had the ball near midfield. Quarterback J.W. Walsh took a hit and was upended: 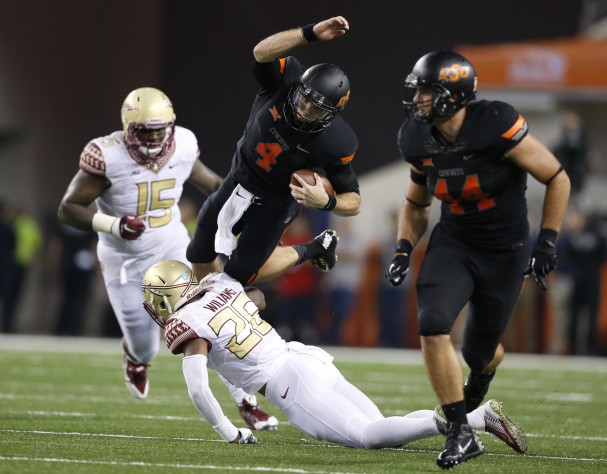 Just before hitting the ground, though, Walsh lost control of the ball. Florida State recovered, and after scoring a touchdown for a 37-24 lead, the Seminoles were able to hang on for a 37-31 triumph.

Florida State’s receivers were not able to regularly gain separation from a new Oklahoma State secondary that was expected to be a liability for the Cowboys.

The Seminoles’ defensive line — arguably the biggest strength of the team other than Jameis Winston last season — was bossed around at times by Oklahoma State’s defensive line, certainly in the second half.

Winston was, on balance, an average quarterback — spectacular in several moments and awful in others. He made enough plays to win, but that dropped interception by Oklahoma State could have caused the Noles to lose.

What mattered in the end — in much the same way that a nervous tennis underdog fails to concentrate on break points against Serena Williams or Novak Djokovic — is that Oklahoma State couldn’t finish a few extra plays that might have made the difference. A dropped pick and a late fumble allowed Florida State to survive.

What does Florida State’s survival act mean? What did Alabama’s escape mean?

You want the whole answer right now, don’t you?

That’s not what week one is for — sorry.

Florida State and Alabama are works in progress. New situations — FSU dealing with the pressure of being a defending champion, Alabama with a new quarterback and realigned pieces on defense — will create new dynamics that the Seminoles and Tide must navigate week by week. We’ll be able to know a lot more about these teams in three weeks or so. If they straighten themselves out, nothing from this shaky weekend will be remembered…

… except, of course, for the fact that they won.

That, dear friends, is the point of week one in every college football campaign.