Really, this was supposed to be a Monday column, but we’ll chalk it up to me needing 85-year-old man type of sleep hours and not feeling sharp as to why it’s late. But what’s the old saying? Better late than never? Applies to most things. Probably not this column. “Never” would be preferable to most people. And Dave Matthews Band music. I can deal with “never” on that existing too. But away we go. We’ll try to be better next time.

– The AP poll came out, which has become basically a screen door on a submarine or Busch Signature (what even is that, the “better” Budweiser run off?). It’s a useless postulate at this point, kept alive because media will try to make it important because they want to feel important. Really though, it lost its power when the media just started basically making it a carbon copy of what all the other polls look like. I’d like to see a world where it mattered again, but I’m not sure the media has the onions to vote a different team No. 1 in a controversial season (cough, choke, hack, 2011).

– People got all worked up about 8 SEC teams ranked in it, but for the most part, you can make a case for each of them other than Texas A&M. Sticking them in is like that one girl in every season of Teen Mom which isn’t interesting, isn’t worth watching, and you feel like is there just because they HAD to have a final person.

– The AP really had a chance to cement itself during the BCS era, but opted to “not make the news but to report it.” Fine, but it’s an opinion poll, and it lost a lot of teeth basically looking like a copy and paste model of Coaches, then the Harris. It’s an institution of sorts, but basically one only for the people that are a part of it.

– Can’t bring myself to be faux offended by the Notre Dame academic scandal. Anyone who says “I’m glad I root for program X, they do it the right way” is either willfully delusional or has their head in the sand. The money in college football is deep, and every program … yours, mine, your rivals … they’re doing what it takes to get ahead. Sorry.

– I’ve gotta put Subway on blast. The only thing more mythical at this point than the Figi Mermaid, the Bermuda Triangle, and non annoying politically charged Green Day music is the $5 foot long. Go in to get the same sub as I have for years, and suddenly it’s part of the $5.25 menu. Times were, they had about 10 options. Now they have basically the veggie sub and you know what, I get that the cost of product goes up. Unfortunately, my desire to pay for mostly mediocre food has not. Bring back the $5 foot long (which is basically like 10 inches) and I’m back in.

– Also on blast? People who rush to stop at stop signs like it’s some sort of race, then everyone sits there like they’re trying to split the atom waving everyone else through. Then one guy inches out at the same time as another guy. Both hit the breaks and give that “stop, then ‘no, you go'” thing where you assume someone across the street can read lips. You know, there are rules. It’s in the driver’s manual who gets to go first. Stop being dumb. Please.

– Also, stop complaining about people doing the Ice Bucket Challenge for ALS. People are donating money to a very worthy cause and learning about something they otherwise might not. It’s a great thing. I’m not concerned you’re tired of watching people’s videos on Facebook by comparison.

– Back to a few football things before we mercifully let you go. I don’t know what you gambling types are looking at with bets on teams this year, but Indiana and Washington State are locks and I don’t even need to look at the lines. I just know it. Over (whatever the line is) on wins.

– I hope Johnny Manziel is really good in the NFL. I’m not sure it turns out that way, but the outrage of him partying all the time AND being good might break social media, which would be okay with me.

– A little surprised Braxton Miller is still suffering from lingering effects from his shoulder injury. I know it’s flown mostly under the radar (this was written before the shoulder injury report came out Monday night), but surely Miller has to be in the top 5 of most important players to his team’s success, no? With Miller, Ohio State can contend for a title of any kind. Without him? Sort of yeesh, I suppose … ?

– Cardale Jones might be the next man up if Braxton Miller goes down. Or J.T. Barrett. But one of the guys thinks class is pointless … so yeah … Miller needs to be healthy. 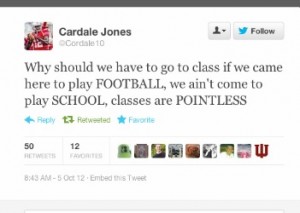 Ohio State’s only option that’s thrown a pass in a game after Braxton Miller is a guy who hates class. Hmm …

– Of all the teams that do the 700 different uniform combinations, I think Arizona State does it the best. Everything the program comes up with is sharp, and part of that is because it’d be tough to make something lame with a name like the Sun Devils. Good on them.

– Also, I do love the creativity with uniforms, think it helps in recruiting, and think it’s a worthy schtick for “rivalry” games or big contests. I’ll never understand the collective outrage of the Great Creative Uniform Push. The creativity on some of it is off the charts. No, I don’t want giant Wolverines on Michigan’s helmet or anything and there’s a level of cheesiness that probably shouldn’t be crossed, but overall I enjoy all of it. Keep it up, Nike, Adidas, and Russell Athletic (if they’re still a thing).

– With football season coming, one thing is for sure: it sucks for your girlfriend/wife. Whereas there was a fighting chance yard chores got done or family day trips planned, now there’s no assurance and even if it’s considered, the old “let me see when Alabama and LSU play this week and we’ll work around that” happens. So be nice to the people in your life who smell, look, and act a lot better than you. Go on a date before the season starts, maybe buy an afternoon at a spa for them, and look at the schedule for the crappy college football weeks that you might be able to avoid watching without getting hives. You’ll win in the long run.

– I move to some sort of law where candy is required to have a quota on how many orange and yellow pieces they put in each packet. No one, anywhere, ever, likes those colors as their favorite flavors of any candy. Meanwhile, red continues to be under-produced … in all forms of candy.

– Lastly, for the Beer of the Week, we’re going with Four Horsemen Pale Ale. It gets an A. Without the help of anyone else. Find and Feast.