EDITOR’S NOTE: This piece comes from our friends at Bloguin’s Ohio State site, The Buckeye Battle Cry. This piece is cross-posted from The BBC (not to be confused with its British cousin). The original link can be found here.

Every week, the gang at The Buckeye Battlecry take a look at a controversial or questionable officiating decision from the previous week in college sports… this week, the onside kick at the end of the Penn State/Michigan game.

OK Buckeye: Well, another exciting week in Ann Arbor. scUM’s game against PSU ended with some controversy as a relatively unique game situation occurred- a safety free kick off onside attempt. The attempt was successfully recovered by the kicking team (PSU) giving the Lions hope for a miracle victory, but alas, the kicking team was ruled to have been offside.

Let’s analyze the play, starting with the rules in question:

6.1.2.a A ball from a free kick formation must be kicked legally and from some point on Team A’s restraining line (Exception: Rule 6-1-2-c-4) and on or between the hash marks.

2.12.5 A restraining line is part of a vertical plane that limits a team’s alignment for free kicks. The plane extends beyond the sidelines.

6.1.2.c.1 When the ball is kicked: Each Team A player, except the holder and kicker of a place kick, must be behind the ball

The mechanics in question: The calling official on this play is the Umpire who along with the Back Judge are ruling onside or offside by the kicking team. You can see that his flag is clearly out before the ball is recovered by either team. In college, offside is a live ball foul so the play is allowed to continue.

Philosophy: The national philosophy on officiating the restraining lines of teams on potential onside kicks is very clear: The kicker’s restraining line on onside and short pooch kickoffs should be officiated as a plane. Any player (other than the kicker or holder) breaking the plane before the ball is kicked should be called for offside. The same plane applies on normal kickoffs, but officials should not be too technical in regard to players breaking the plane. 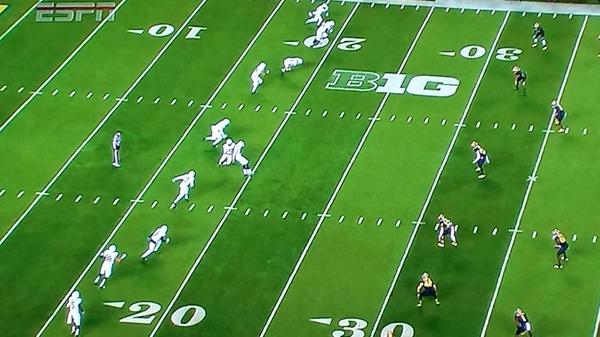 Final analysis: This is obviously a really tight call and ultimately a judgment call by the official in question. Kudos to him for having his flag out early, although it is a fairly impotent toss. The rules clearly state that the ball must be placed on the restraining line to be kicked legally and that the restraining line is treated as a plane (similar to the goal line) for ruling whether or not a player is behind or in advance of said line…

Finish this article and check out the other officials’ opinions over at tBBC!