We’re under a month from the college basketball season, so that means it is preseason lists time. Scott King and I have collaborated to produce a Preseason Top 26 (because 25 would be too boring). We have split the 26 teams into six groups, and we’ll lead off with team 26, a former Pac-12 also-ran that is expected to make a big jump this year:

Key number: 53.7 %. The Utes shot that percentage inside the arc, the 15th-best rank in the nation, and topped the Pac-12 in that category.

The Utes return all of their key minutes from last year’s team, and there’s hope they can be much better this year. Despite a struggling offense, the Utes led the Pac-12 in scoring inside the arc. Their main missteps were from three-point range (6th) and turning the ball over (9th). Perhaps the team just does not have good shooting, but experience can improve their turnover issues.

Defensively, though, is where the Utes shined. They were one of the best shot-blocking teams in the Pac-12, and were also one of the best power conference teams in America at not letting teams get to the rim (via hoop-math.com).

Senior Delon Wright, who played in over 90 percent of the Utes’ minutes last year, is a darkhorse All-American candidate: he posted a true shooting percentage of 63.3; pulled down his fair share of defensive rebounds; and produced an assist rate of nearly 30 %. He also was in the national top 30 in steals.

2013-’14 tweetcap: “Michigan, but for a prayer from Aaron Harrison, would have been in the Final Four for the second straight year.”

Two years ago it was Trey Burke. Last year it was Nik Stauskas. Now Caris LaVert gets his chance to try to go from also-ran as a recruit to Big Ten player of the year. LaVert isn’t thought of as the same type of all-around player as Stauskas, but upon closer inspection he provides roughly the same value: he shot a bit worse from the field, but was much better on the glass. Unlike Stauskas, and Burke before him, LaVert has all-defensive team potential.

Other than LaVert, Michigan is essentially starting over: Stauskas, Mitch McGary and Glenn Robinson are off to the NBA. Jordan Morgan graduated, and Jon Horford transferred to Florida. John Beilein will have to turn Zak Irvin, Spike Albrecht, and a relatively unheralded recruiting class into Big Ten contenders. If we have seen anything from Beilein thus far, he’ll be able to do just that. 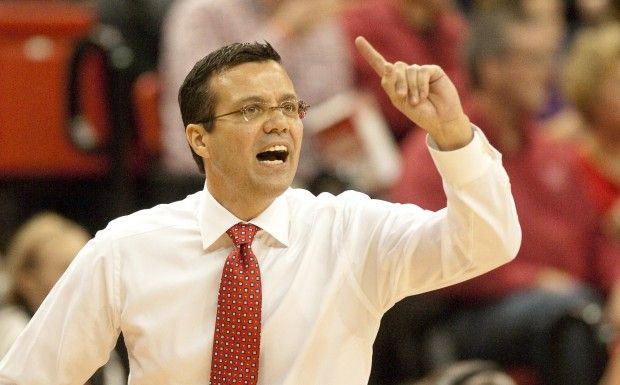 2013-’14 tweetcap: “New facilities, a star player, and a potential superstar coach. Can Nebraska take the next step?”

Tim Miles emerged as a coaching star for the Huskers, who beat Wisconsin, Ohio State, and Michigan State last year. However, can the Huskers take the next step and contend for the Big Ten?

Terran Petteway was one of the most active players (25th in usage rate) in college basketball, and is getting some serious All-American buzz. While he could do with shooting a couple fewer threes (32 % on 127 attempted) he did a little of everything for Nebraska last year. He rebounded, he was a decent passer (plus some turnovers) and he got to the line often.

Nebraska was poor offensively last year, however, for two reasons: the Huskers ranked 306th nationally in getting to the rim, and they shot just 33.3 % from three. That meant a lot of missed threes or mid-range jumpers. If Petteway can improve on taking just 29 % of his shots at the rim, Nebraska should be much improved offensively. The Huskers also did not pursue offensive rebounds, ranking 323rd nationally in that stat. Jake Hammond, a 6-10 recruit, can help in that area, but a lack of size will be a major hindrance to the Huskers’ progress, especially in the Big Ten.

2013-’14 tweetcap: “The upset of Kansas saved the season and Johnny Dawkins’ job. Time will tell if that was a good thing.”

Josh Huestis parlayed Stanford’s run into a first round selection in the 2014 NBA Draft, and Chasson Randle is potentially the best guard in the Pac-12. Randle shot 39 % from three-point range and 53 % on twos, though he will have to contribute more from an assist/turnover standpoint if Stanford wants to avoid being a team without a point guard again.

Stanford loses some key height in Dwight Powell and Huestis, but the Cardinal return a lot of the players instrumental in the key number listed above. Stanford didn’t get to the rim often, and its rim defense was always more about potential (see: the Kansas game) than consistent results, but the pieces to make a winner are there if they can figure them out. I hear Stanford kids are fairly smart, so I have high hopes that they will, even if they’ll miss Powell and the lack of a point guard might be a tough obstacle to overcome.

Ohio State was one of the best defensive teams in the country last year thanks to Craft and Scott’s ballhawking on the perimeter. They were 16th nationally in turnovers forced, 15th in steals. There was perhaps some luck on their side, however: opponents shot just 29.3 % from three last year. Ohio State did not allow many threes, and with Scott and Craft on the perimeter I would venture a guess that they did not allow many good looks either, but that number is going to come up both from regression and from Craft no longer being in the fold.

The big question seems to be who will be Ohio State’s leading scorer? That role was never in doubt with Jared Sullinger and then DeShaun Thomas, but there was a bit of a power struggle last year and could be this year as well. Scott was a very effective assist man in 2012-’13, but abandoned that last year to shoot more. He made 51 % of his two-point shots but just 30% from three, and, Russ Smith aside, I don’t love the chances of a 6-1 guard who can’t shoot threes to lead an efficient offense.

Perhaps the answer will be D’Angelo Russell, a McDonalds All-American who has shown tremendous scoring potential.

Last year was the only year since 2010 in which Thad Matta finished outside the KenPom top 10. He’s got some work to do to get back up there, but he’s shown that he’s a good coach, and despite losing some key players, the Buckeyes have the talent to be one of the better teams in the Big Ten.