I was watching the timeless holiday classic Rudolph the Red Nosed Reindeer last week when it struck me that Santa’s whole system needs an about face, and to bring in an HR guy at some point. He basically dismissed Rudolph’s chances of being on the sleigh team just because he had a red nose. Then you’ve got the Reindeer Games, when Rudolph has a funny voice and a HUGE fake black nose, but he’s better than anyone else and folks are like, “whoa, homeboy can fly.”

Then the nose falls off and they’re all, “homeboy can fly, but even though he’s the best we’ve got, he’s funny looking so we’ll go with a weaker sleigh team.” Never mind the fact that they didn’t account for what happened if there was a storm (seriously, was that the first time it’d ever stormed on Christmas Eve there?), it’s horrible team-building sense to leave off the most talented dude because he looks funky.

So, sans Rudolph basically getting bored of wandering around by himself and cheesing off the parents of other animals who were freaked out by his red nose, Christmas doesn’t happen because the only creature at the North Pole with any shred of HR sensibility is Clarice.

Where am I going with all of this? Deciding whom to put in the right positions is crucial to success, and if you have people running the operation making dicey decisions on who belongs in the fold and who does not, you’re going to screw things up pretty badly.

Around this time of year in college football, the HR sensibilities of athletic directors are on full disclosure. ‘Tis the season this time around of what looks like pretty good decision making. Obviously, the next three to four years will determine that, but everyone’s all rainbows and gum drops when a new hire is made. Even though this year, they probably should be.

So let’s go through the new hires and rank them, and see who’s more Santa and who has a little Clarice in them.

1. Bob Stitt, Montana: Three cheers to Montana, which you wouldn’t expect to make the most landmark hire in college football as of mid-December. Stitt was a relative unknown other than to college football junkies until West Virginia’s Dana Holgorsen credited his offense with helping the Mountaineers abuse Clemson in the Orange Bowl a few years ago. Then, Stitt basically became a band that was underground — only lifers knew who he was and would proudly offer the “yeah, they’re awesome but only music people really know about them, so I wouldn’t expect you to know” line to Stitt Happens. All the underground folks are shaking their fist as if to say, “It’s all too commercial now. Everyone knows who they are.”

Stitt is considered an offensive visionary who has been with the Colorado School of Mines Orediggers (the greatest nickname in college football), and now we’ll finally get to see if that offense of his can work at a higher level. Basically, it’s not as though he’s re-inventing the wheel, just making it simpler on the quarterback to make decisions and formationing (fake word alert) the heck out of everyone pre-snap. A lot of it seems more psychological than X’s and O’s, which is what makes it so darned brilliant. Also, he hates punting. Which is awesome. It seems like Stitt, who turned 50-years-old this year, took that as the cue to try something new. Kansas should have made this hire.

2. Gary Andersen, Oregon State: You’d think it takes some brass onions for Oregon State to think, “Mike Riley left? Well, we’ll just poach Wisconsin’s coach after the Badgers play for a conference championship,” but it sounds like Andersen had one foot out the door and was looking for anyone who’d let him crash on the couch.

This is a big hire, what with Andersen being the architect of the still-continuing Utah State football revival; him having a West Coast recruiting base already; and Andersen having proven he can win at the Power 5 level. This one’s hard to believe. The Beavers are lucky they had a couch available. That said, Andersen runs the risk of being labeled a job jumper if he doesn’t stay for a reasonable amount of time … all the more reason he should end up staying, which is also good for OSU.

3. Tom Herman, Houston: Not bad, plucking a Broyles Award winner who has recruiting experience at the college level in the high school hotbed of Texas. Houston could have done a lot worse, and Herman figured to have plenty of options to pick from. The only down side is that you’re Houston, which means you’re like a girl who’s a seven. If a guy gets a chance at a 10, he’s probably leaving you. But such is life at the non-Power 5 level. The best you can hope for is to snag a guy who can win for you for a period of time before scuttling on.

University of Houston President Renu Khator took to Twitter to inquire about people’s opinions on the new football coach (which is like going into a comic book store on a Friday night for relationship advice), and four days later, Herman was named the coach. Wise. Make them think like you value their opinion, because it had to be in the works by then. Deft. Houston seems to be good at this stuff, with two of the last three hires being some dudes named Art Briles and Kevin Sumlin.

4. Bo Pelini, Youngstown State: This is a heck of a hire here for the Penguins, because one would think Pelini had a shot at a top level defensive coordinator position, but the itch to keep running a program that wears red and white was apparently strong. Pelini took parting shots at Nebraska, noting that now he finally has a president that understands football.

That guy’s name is Jim Tressel, who … yeah … he does. Pelini probably goes and chases new rainbows at the FBS level at some point (or when Iowa opens up eventually), but it provides an invigorated jolt to YSU and a program that other than Tressel, you probably can’t name any of its head coaches in the last (however many years they’ve played football there) off the top of your head. And Pelini gets guys to play for him. Good times. Even if you think a few of the coaches below are better football minds, hiring Bo makes people pay attention to a program they otherwise might not. And “pay attention” means “MONEY.” 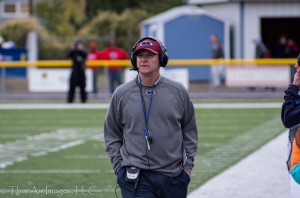 If Stitt Happens, it’s going to happen in Montana. That rates at the top of the offseason hires in college football thus far.

5. Jim McElwain, Florida: Some point to McElwain’s non-flashy record as proof this was a bad hire, but that’s crap. Records are deceiving when taken just at numerical value. Where are you coaching? Where was the program when you took over? It’s like a pretty girl who can only shop at Wal-Mart for clothing. It doesn’t mean she’s not gorgeous, just that she has less artificial advantages to work with. Colorado State was in shambles when McElwain took over: 12 wins in three years. McElwain won four games the first year, eight the second year, and 10 this year. Plus, he has recruiting ties in the South, and you need that. Now, he might need to work on his issues with buyout numbers, but other than that, this seems like a pretty darned good hire.

6. Mike Riley, Nebraska: As written previously, this feels a lot like getting into a relationship with someone because if nothing else, they’re the polar opposite of your last girlfriend. That rarely is the way to go. But Riley is a great football coach, because Oregon State was unspeakably awful when he was hired in 1997. The Beavers made gains. He left. Dennis Erickson took the school to new heights. Riley came back and picked up where he and Erickson left off at a place where it was never really easy to win.

The downside is the aforementioned psychological issue people make when entering into new relationships in all facets of life. The other downside is you don’t know how much longer Riley really wants to coach. Only he knows in his heart of hearts, and the more the pressure, the faster the aging process. Nonetheless, it’s hard to think Nebraska isn’t looking for a new coach in a decade or so.

7. Paul Chryst, Wisconsin: See above. The hiring of Chryst seems like dating a person because her most redeeming characteristic is that she won’t leave. It’s not to bang on Chryst, just the process itself. Wisconsin is a place you can step into immediately and start winning big. This hire was seemingly done overnight after Andersen left Wisconsin feeling jilted.

If that’s what you need … just someone stable that you don’t have to worry about coming home and seeing her bags unexpectedly packed, then that’s what you need. But Chryst’s tenure has been sort of Kix Cereal at Pittsburgh, and the bottom line is that Wisconsin hired a coach with a 19-19 record at a Power 5 conference that isn’t banging around in the Pac-12 or SEC. By the way … poor Pitt. The girl that never leaves actually left the Panthers.

So there you go. If any of these guys made the wrong hire, Rudolph ends up chilling on the island of misfit toys sipping Pyrat with Charlie in the Box and the train with square wheels while the Bumble strolls through Christmas town, wrecks everyone’s stuff with his still-in-place teeth, and Christmas doesn’t go off because of that storm and the misfortune of only having normal-nosed reindeer on the roster.

Everyone’s hoping they have more Clarice in them. And yes, if Pelini ever goes to Iowa, he pretty much becomes Rudolph the moment he starts winning. That aged, portly snowman narrating will talk about him until the end of time.