Bill Snyder, relative to the circumstances he inherited and the accomplishments he has forged, deserves serious consideration as one of the 20 best college football coaches who has ever lived.

He’s been that great for that long at a program which used to be Rag Doll University for the Nebraskas and Oklahomas of the Big 8. If Snyder did what he did at, say, Arizona State (a place with more of a recruiting lure and a “sleeping giant” feel to it), Snyder wouldn’t be able to be viewed in the same light, but since he took Kansas State from rock bottom to the top of the Big 12, and — this is important — was able to return the Wildcats to the pinnacle in a second coaching stint following retirement (that sort of move doesn’t work out very often over the course of history in all sports), his body of work just gets better each year.

Snyder also had his team supremely prepared for Gus Malzahn’s Auburn squad last Thursday night. Kansas State defenders were consistently in position on Auburn’s running plays. The Wildcats were in the right spots on the field for the majority of the evening, and that’s why they held the GusBus to 20 points, a marvelous feat. Kansas State did benefit from Auburn’s dropped passes all night long, but the Wildcats naturally would have had a much better chance to win if they simply could have made the three field goals they missed, and if star receiver Tyler Lockett hadn’t allowed an easy touchdown pass to clang off his hands in the end zone, right into the waiting arms of an Auburn defender. Snyder coached well on Thursday, and basic mistakes by his players cost his team the game more than anything else.

Yet, as brilliant (that’s not hyperbolic for a man of Snyder’s credentials) as the white-haired wizard was on Thursday, he still committed a coaching error out of the “Coaching 101 Endgame Management Handbook.” It was an error that is as basic as it gets.

With 2:59 left in regulation and Kansas State trailing Auburn, the Wildcats watched the Tigers get five yards on a second-and-four play to move the chains. As you know, a first down stops the clock in college football. While the chains are moved, the clock remains frozen. When the chains are fully moved and the crew is set, the referee will signal for the clock to be re-started. Depending on the speed at which this process occurs, the span of time between the end of the first-down-gaining play and the start of the subsequent first-and-10 play will be around 10 to 15 seconds shorter than for any two in-bounds plays that do not involve a gained first down. It is plainly obvious that if a coach calls a timeout on defense after an opponent gains a first down, he is throwing away at least 10 and maybe 15 or so seconds. It’s a pure gift to the opposition.

It is true that Auburn ultimately sealed its win by converting a third and nine with two minutes left and Kansas State having no timeouts — the Wildcats were burned not by Snyder’s foolishly premature timeout, but by having to use a timeout early in the fourth quarter, well before the endgame sequence. Nevertheless, it was shocking to see Snyder call a timeout which handed Auburn a dozen free seconds or so.

Paul Chryst of Pittsburgh made this same error in the final minutes of the Panthers’ loss to Iowa. This has to be a no-brainer for coaches, but it remains a problem. This is why I and other college football bloggers dream of being able to move up in the world one day, in the realm of pure fantasy:

@BPredict I can't stand it. I can't. At some point I'm gonna lose it and send a resume to every single D-I coach to be a "game manager".

What was also shocking from this past Saturday is how other good coaches couldn’t keep their timeouts straight in other kinds of situations. 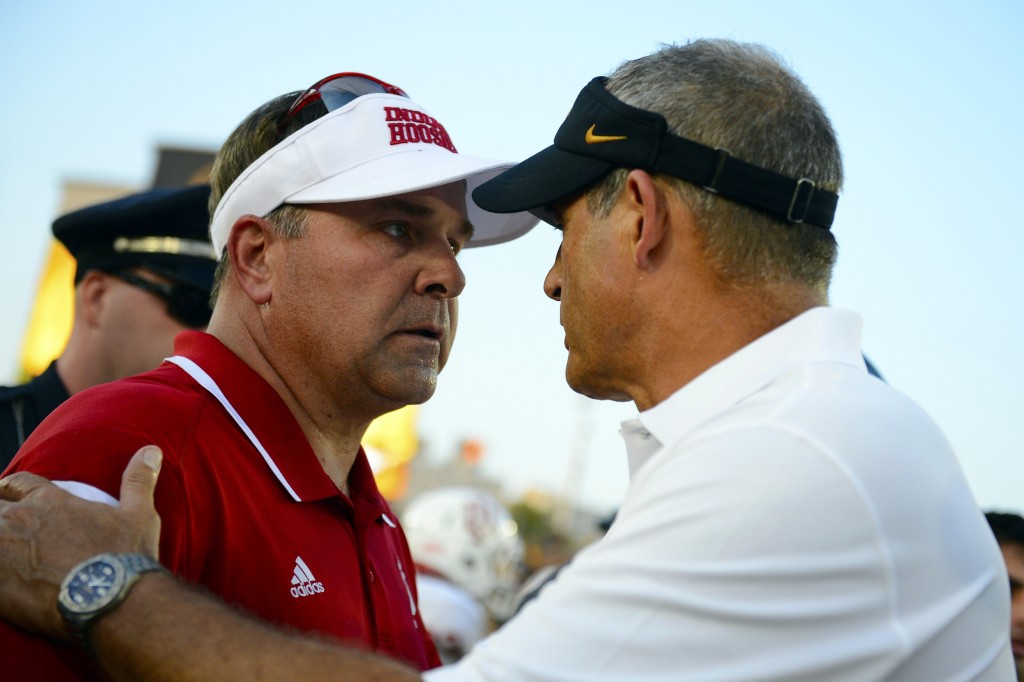 Gary Pinkel led Missouri within one win of the 2008 BCS National Championship Game against Ohio State. On the verge of HotSeatVille entering 2013 after several seasons of drift, he merely led Missouri to an SEC East championship. He’s pretty good, yes?

Well, on Saturday against Kevin Wilson and Indiana (pictured, above), Pinkel simply fell asleep at the switch.

With 59 seconds left and trailing by three points (27-24), Indiana advanced the ball to the Missouri 7 on a 44-yard pass play that went out of bounds and involved a late hit on the Tigers.

Here’s the video of the play, just so you can verify that the long play did end out of bounds with 59 seconds on the clock:

On first and goal, Indiana ran the ball into the line. Missouri had two timeouts left. Indiana went to the line as though simulating the act of running another play, but then the Hoosiers backed off. Indiana head coach Kevin Wilson did a great job of selling Missouri on the notion that it was going to quickly run another play. When the Hoosier offense then backed away after several seconds, it became clear IU was trying to drain the clock and make sure Missouri didn’t have much time left in the event of a Hoosier touchdown. Wilson manipulated the situation beautifully, exactly as you’d hope your coach would do in such a situation. By the time the Missouri coaching staff realized what was happening, it was too late.

However, this never should have happened, as SB Nation’s Bill Connelly stated in a very simple way:

Coaching is hard, and I am incredibly forgiving of almost every decision made. And blowing 25 seconds for no reason is incomprehensible.

Pinkel shouldn’t have needed to wonder what Wilson would have done. The use of his second timeout should have been automatic after the first-and-goal run by Indiana created second and goal with 50 seconds left. When Pinkel called timeout with 26 seconds left, he had indeed wasted roughly 25 seconds.

Let’s step back and realize what Pinkel’s failure to call two immediate timeouts did for his team: If Indiana passed the ball on second or third down, the Hoosiers naturally wouldn’t have been able to run a lot of clock in the final minute, but what if Indiana had indeed kept the ball exclusively on the ground? Missouri (Pinkel) would have called a second timeout with 50 seconds left on second down. The final timeout would have come with around 43 to 45 seconds left on third down.

If Indiana failed to score on a third-and-goal running play, the Hoosiers either would have kicked a field goal or gone for the win on the final play of the game (on fourth down). Missouri wouldn’t have been in a great position, but it would have either been assured of overtime (if Wilson opted for the field goal) or one stop from winning (if Indiana pursued the go-for-broke touchdown).

What about the other twist in this hypothetical? What if Indiana had scored on the third-down running play? Well, Missouri would have had about 38 to 40 seconds to work with. That’s not a ton, and it certainly doesn’t suggest the Tigers likely would have won. However, as events played out at Faurot Field on Saturday, Indiana scored its go-ahead touchdown with 22 seconds left. Following a touchback on the kickoff, that’s how much time the Tigers had for their final possession… all without using one of their remaining timeouts because Indiana scored a touchdown on its second-and-goal play from the 3.

When you realize that Missouri still wound up with one Hail Mary shot on the final play of the game, imagine how much those 16 to 18 saved seconds could have meant for the Tigers, possibly as many as 23 saved seconds if Indiana scored on a second-down running play with 45 seconds on the game clock, instead of the 22 that were left following Pinkel’s tardy timeout.

I love what I’m doing here at The Student Section, getting to cover college football and watch a 14-hour wall of games every Saturday.

Yet, if a big-time FBS coach asked me to become a timeout consultant or game management assistant, do know that I’d uproot my life in Seattle and sign on the dotted line right away. Many of my fellow college football bloggers would do the same thing.

The use of timeouts in endgame situations should not remain so persistently confounding to coaches who have done mighty deeds at Kansas State, Missouri, and elsewhere in these United States. Eight months of offseason study on an annual basis, plus decades of accumulated training and observation, should make some lessons painfully clear. Yet, as great as Bill Snyder and Gary Pinkel in fact are as head coaches — they’ve forgotten more about football than I will ever know — they failed to use their timeouts properly in week four.