“Hey, a rule is a rule, and let’s face it, without rules, there’s chaos.”
– Kramer, Seinfeld episode The Big Salad

Kramer is right, which he usually is. Mustard and ketchup in the same bottle is a genius idea. One side has mustard in it. One side has ketchup. You open both hatches and boom, both come out simultaneously. I mean, if Heinz can market bottles of ketchup, mayo, and mustard in a package and over-charge by calling it a “picnic pack,” surely this can be done.

But rules are rules, and without them, yes, there is some form of chaos. That doesn’t mean some rules shouldn’t be changed. In Tylertown, Miss., it’s illegal to shave in the center of Main Street. Hey, I’m all for free shaving wherever. College football is not oblivious to stupid rules. And without them, or at least tweaking them, no, there would not be more chaos.

1. The Touchdown Celebration Rule: By letter of the law, whenever a touchdown is scored, the player is supposed to “immediately” return the ball to the official or return it to the dead-ball spot. A celebration deemed too over the top, “flagrant unsportsmanlike conduct” can be assessed and the player ejected. Otherwise, excessive celebration nets an absurd 15-yard penalty.

This rule sucks on so many levels, especially in college. Most people tend to take up sports as kids because they’re fun, and it’s hard scoring touchdowns. So why not enjoy it … and maybe with the guys that helped you get there? The idea that celebrating is some sort of slap in the face to the opponent or “unsportsmanlike” is about as sissy of a stance as you can take. Soccer players routinely go over the top with celebrations with or without teammates that last nearly a minute at times. I’m not exactly seeing where it’s ruining the sport of soccer. Overall, every sport needs to ease up and simmer down on policing actual enjoyment. They’re college kids. Party on.

2. Fumble off the pylon/out of bounds in end zone results in a touchback: Perhaps the most glaring example of this is from 2013, when Tennessee was playing Georgia (pictured in the cover photo for this story). The Vols were motoring in overtime for a go-ahead touchdown when their running back exerted actual effort, dove for the end zone, but the ball squirted out of his hands and hit the pylon as he was efforting a touchdown. Granted, the wise play is just to hold the ball, and worst case scenario, you’re down inside the 5. But can you really police effort? Damn right you can, college football.

So instead of, at worst, getting a chip shot field goal attempt and more likely a touchdown, because the ball hit the almighty pylon and caromed out of bounds, Georgia got the ball and did basically nothing with it but kick a long field goal to win. The point of the rule probably is to protect the defense if the offense reaches across and in the process, the D slaps it out. Yes, the defense causing a fumble should be rewarded. Yet they aren’t if they force a fumble and it simply goes out of bounds without possession changing. So what’s the deal with a guy causing his own fumble and the entire offense being punished for that kind of effort? And why a touchback? Stupid rule. If nothing else, I’ve got Tennessee on my side.

3. The ball carrier can’t advance the ball with no contact and a knee down: The NFL, like most rules in football, is a little more progressive with changing stupid rules. College football plods on with its cassette tape and roll down windows mindset. This rule just makes no sense. How many times have we seen a quarterback run to elude pressure, make a great move, slip on the field for whatever reason … rain, logo paint, everyone’s been slipping that day … and boom, he’s down. In the NFL, he gets up if he can and makes a play.

Same with a player diving for a catch. Again, it almost punishes effort. It also ill prepares players for the professional level. NFL teams practice those sorts of situations, because even pro players get caught napping and it makes a funny clip for NBC’s Sunday Night Football, whereas the coach on the right side lauds “heads up football” for his team. Anything that prohibits preparation for the next level, punishes effort, and makes the game less exciting is an idiotic rule.

4. In overtime, possession starts from the 25-yard-line: This is one of the few areas where the college game progressed faster than the pro game, at least entering a world where … GASP! … both teams get a shot to score and win. Since then, the NFL has moved to adapting something sane while college football’s format is better than what it was, but needs serious work.

Why exactly the ball starts at the opposing 25-yard-line is beyond rational comprehension. For one, it gives way too much power to the kicking game. Sure, kicking is part of a football game, but many times, it basically decides overtime. An offense with a good kicker is at such an advantage over one without one, and while some might say “Hey, have a good team from top to bottom, eh?”, it seems a bit silly to place so much emphasis on one player, and one that participates in only a handful of snaps per game. Ideally, you either get down restrictions to score or the possession is started outside of field goal range so the onus is on the offense to win and the defense to stop, leading to a more complete win and fewer 65-62 football scores.

5. The 3-Second Spike Rule: Nice to see the NCAA is now in charge of policing time constraints. In basketball, there’s always this idea about how long it takes to get up a shot at the minimum to where it should count. Probably the most famous example of this was the 0.4 second “Derek Fisher versus the Spurs” in the playoffs years ago, when he was deemed to have caught the ball and released a shot within that small amount of time. 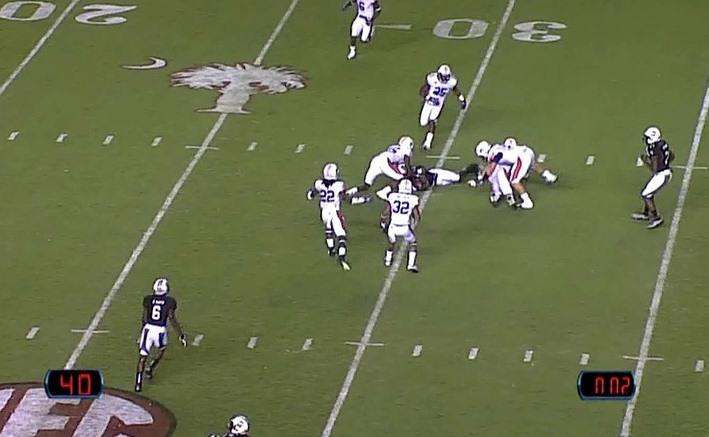 Complicated, chaotic endgame scenes such as Auburn-South Carolina from 2011 helped lead to the installation of the three-second spike rule, but can’t this problem be resolved in a different way and from a different perspective?

Bupkus on making the most of your time, says the NCAA. This one didn’t get much traction when changed, but it could be a real sucker punch this upcoming season. Basically, the NCAA has deemed that you can’t execute a spike in under 3 seconds, so don’t try. Just run the play, because no matter how hard you practice to make it quicker … even if you do … the NCAA doesn’t want to hear about it. Now, if there are under 3 seconds and the clock is stopped for a first down and so help you God, you got to the line of scrimmage to get that spike off and then rush the field goal unit on … don’t think about it.

Only thing left to do is have Mark Emmert hitting a golf ball into a skyline with terrible pop music in the background, a la Rory McIlroy, for an Omega commercial. The NCAA now decides how long it takes to do stuff, not stuff actually happening within a time frame.