Michael Sam had already played his last down of college football when he publicly announced he was gay. Chip Sarafin of Arizona State has made yet another piece of history in American sports by becoming (what appears to be) the first openly gay college football player we know of.

The story, in Compete magazine, is not a long one. It’s not a wrenching or overwhelming account. It’s not a long, twisting tale replete with “dark nights of the soul” tear-jerkers or near-death, rock-bottom emotional traumas. (It does include a poignant segment about standing up to bullying in high school, but the passage, like the rest of the article itself, just doesn’t go into granular anecdotal detail.) Yet, it contains a reference that a lot of longtime college football watchers probably wouldn’t have expected.

Early in the piece, Sarafin simply says, “U of A (the University of Arizona) had a little more interest in me, but I took a chance and came down to [Tempe] to talk with Frank Kush who was able to get me a walk-on position at the time.”

Frank Kush, of all people.

Following up on colleague Terry Johnson’s 10 Best Coaches You’ve Never Heard Of piece from yesterday, it’s worth asking if readers outside the Western United States (and Baltimore, and Nebraska) can identify Kush.

Pause to see if you can pick out the name. Okay, time’s up.

Kush took what Devine established in three years and essentially stretched that period of prosperity over the course of two decades. In 21 full seasons in Tempe, Kush enabled the Sun Devils to grow in accordance with the Fiesta Bowl, the postseason event ASU itself put on the map at Sun Devil Stadium. Arizona State went 4-1 in Fiesta Bowls under Kush, the big one being the 1975 game against No. 5 Nebraska, a 17-14 victory that could be likened to Boise State’s win over Oklahoma in the 2007 Fiesta Bowl.

Arizona State played in the Western Athletic Conference in 1975. The Fiesta Bowl was a December game in a much smaller Sun Devil Stadium than the one which exists today. A crowd of 51,396 attended the ’75 Fiesta Bowl, but after Arizona State won to finish the season 12-0 and ranked second in the United States, the national perception of the ASU program began to change. Accordingly, a number of realities surrounding Arizona State football began to change as well. 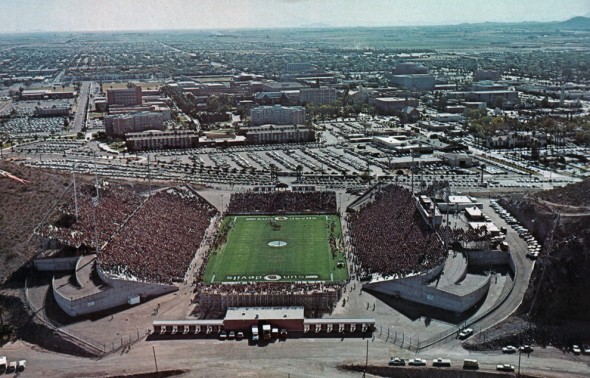 This is what Sun Devil Stadium once looked like… 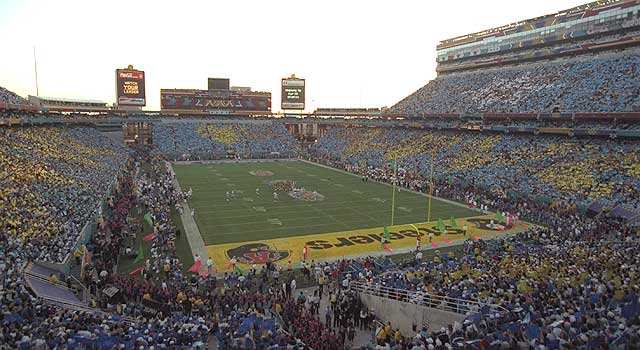 Soon, in a development very much related to the one above, the Fiesta Bowl would become a premier January event (1982).

Soon, Arizona State would find a home in the newly-named Pac-10 Conference, formerly the Pac-8 (1978).

This was Kush’s doing (with Devine getting a hockey assist for the three seasons in the 1950s that began to move the ball in the right direction).

Speaking of 1978, when Arizona State left the WAC behind and engaged in its own bit of conference realignment, that was the year one of college football’s most iconic coaches got into trouble for his conduct in the proximity of a player.

Ohio State legend Woody Hayes punched Clemson defensive lineman Charlie Bauman at the end of the 1978 Gator Bowl in Jacksonville. With one blow, a storied career at one of college football’s most fabled programs came to an abrupt end, due to a loss of control and a show of excess from an old-school figure who preached toughness, strength, and maximum stamina, in very much the same way Bear Bryant demanded those things from his Junction Boys and subsequent teams. Hayes’s belief in relentlessly running the ball (he was the one, after all, who loved to say that “only three things can happen when you pass, and two of them are bad”) created teams that had to be physically and mentally stronger than the opposition. There were no shortcuts with Hayes. Ever. Not for men of his time.

Nebraskans know Kush because he beat them in 1975. Western football fans over 50 years of age are aware of him, but that leaves a lot of room for many other American college football devotees to not know his contributions to the sport (conference realignment, the development of a program, and the birth of a new New Year’s bowl tradition).

Purely from a fan’s perspective, it’s one of the great sadnesses in the history of college football that one year after Hayes made a (necessary) forced exit from the stage, Kush was forced out in Tempe. His similarly forced departure was the result of his conduct toward ASU punter Kevin Rutledge, who slapped Kush with a lawsuit after claiming that Kush had punched him in the mouth following a bad punt in a 1978 game. The contentious, tangled proceedings of 1979 only got worse as the year moved along. Arizona State officials determined that Kush interfered with an internal investigation of the matter. As a result, they eventually pushed out the most successful coach in school history, even though a jury ruled in 1981 that Kush did not hit Rutledge.

Kush was innocent of the specific act of punching a player, but that doesn’t necessarily mean he was innocent in full. Abrasive, threatening interactions between coaches and players have gotten more recent coaches — think of Jim Leavitt at South Florida and Mark Mangino at Kansas — sent to the unemployment line despite the achievement of considerable successes on the field. In 1979, one year after Woody Hayes gave way to Earle Bruce at Ohio State, Kush left college football in disgrace, even though he eventually gained a small measure of vindication two years after his departure from Arizona State.

Kush made a one-year pit stop with the Hamilton Tiger-Cats of the Canadian Football League in 1981 (and did quite well, going 11-4-1 and reaching the Eastern Conference Final), but he then got a chance to coach the Baltimore Colts. It’s in the pros, not college ball, where a lot of Americans outside the West might remember Kush within the context of football history.

Kush’s old-school identity molded Danny White and many other NFL players of considerable quality while at Arizona State, but a player from another Pac-10 school contributed to Kush’s swift downfall in Baltimore, essentially extinguishing the final flames from a coaching career that ended far sooner than it could have (and, strictly as a measurement of coaching talent, should have).

John Elway of Stanford — remember him? — did not want to play for Kush in Baltimore. Had the two men been able to hit it off, or had the Colts been willing to pick Eric Dickerson in the face of Elway’s insistence that he didn’t want to play for the franchise, the Colts might have been able to succeed under Kush in the early 1980s. Alas, it didn’t turn out that way, and Kush was soon out of the NFL. In 1985, he landed with the Arizona Outlaws of the USFL, but there was just one little problem with the USFL: It folded after the 1985 season.

Frank Kush, at 56, saw his head-coaching career end before its time.

Beloved at Arizona State to this day, Kush has continued to help the program on numerous levels. Yet, when considering the way he left the school in 1979, and realizing how much a golden-boy superstar such as John Elway wanted to avoid playing for him at all costs, you certainly could have come up with dozens of names on the “help Chip Sarafin make history” list before Kush. 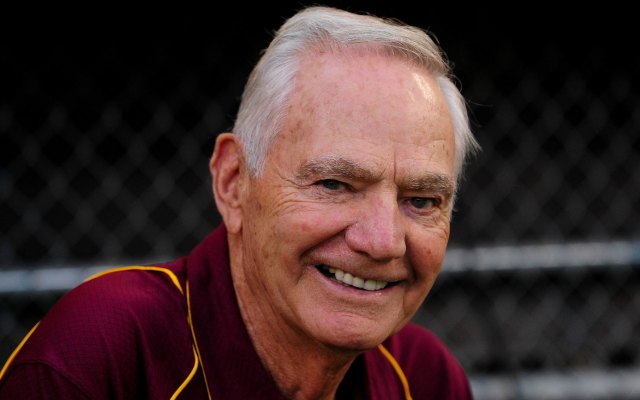 With one simple and quiet act of generosity, Frank Kush has played a part in creating a significant moment in American sports history, 35 years after his tumultuous exit from Arizona State. How many people get to write that kind of chapter in their life stories at age 85? Chip Sarafin’s story is special for many reasons. Kush is one of them.

And so, we arrive at one of those stories which — though not layered in its telling (Sarafin references Kush so simply and briefly, and so early in a relatively short magazine article) — is deeply resonant and positive in its totality.

Frank Kush, whose departures from college football and then head coaching itself were filled with the bitter herbs of confrontation, abrasiveness, and the costs of doing business in sports from 1979 through 1985, has been able to add one powerful contribution to his life and career.

Frank Kush, of all people.

Chip Sarafin’s story is remarkable, and you have quite possibly read a lot about it over the past 24 hours. You’ll very likely read more about it in the coming weeks, with Sarafin rightly being the centerpiece of another milestone moment in American sports.

Yet, one of the most amazing aspects of Sarafin’s story also belongs to the man who helped him find a home at Arizona State. An 85-year-old man has enabled his frustrated self from the early 1980s to find a lasting and elusive peace in the Valley of the Sun.