There wasn’t much drama in the way the Oregon Ducks pummeled the UCLA Bruins on a gleaming Saturday afternoon in the Arroyo Seco.

The drama of this contest lay in the context surrounding it: The winner would stay alive as a legitimate contender for a spot in the College Football Playoff. The loser might not have been technically eliminated, but its chances would have been slim to none over the remainder of the season.

Both Oregon and UCLA entered this season surrounded by more than a little hype, more than merely modest expectations. Oregon expected to be at the heart of the national title conversation because its quarterback, Marcus Mariota, was not just a Heisman Trophy candidate, but an anchor-level player, a cornerstone on which a national championship run can be built. Oregon players sniffed at the thought of a Rose Bowl berth last year; their mindset was “BCS title game or bust,” and they very much busted once their ultimate dream died.

UCLA might not have expected to make the College Football Playoff this year, but there was no question that after discernible progress under coach Jim Mora, the program needed to cement its place as the new king of Los Angeles — not just better than a shaky USC, but as a heavyweight that could reclaim the heights it attained decades ago under Terry Donahue.

When Oregon and UCLA met in the Rose Bowl stadium on Saturday, two programs and their head coaches faced a crossroads moment, an intersection of opportunity and desolation. Oregon coach Mark Helfrich desperately needed a win in this game to quiet the growing doubts about his fitness to lead the UO program well into the future. Sure, Oregon’s offensive line had been ravaged by the injury bug, but the defense’s limp showing in a home-field loss to Arizona on Oct. 2 raised concerns about the larger health of the program in the wake of the departure of former defensive coordinator Nick Aliotti, who had retired in the off season.

Oregon-UCLA didn’t feature two unbeaten teams the way Auburn-Mississippi State and TCU-Baylor did on a consequential Saturday, but the very presence of twin losses on each team’s ledger sheet is, counterintuitively, what lent this game an added measure of urgency.

Clearly, Oregon responded with the ferocity of a team who sensed its season — and its reputation — was on the line.

What has to be said about this game is that Oregon got healthier on its offensive line, with left tackle Jake Fisher returning to the lineup. The Ducks blasted UCLA’s front seven off the ball and made life fairly simple for Mariota. Oregon moved the ball with seamless artistry in the process of amassing a 42-10 lead midway through the second half. The Ducks coasted through the fourth quarter, by which point they had already put this game away.

Yet, an account of this game would not be complete without a mention of the Ducks’ defense, which exploited UCLA’s sieve-like offensive front and bothered Bruin quarterback Brett Hundley from start to finish. Hundley occasionally found success as a solo performer running boldly in the open field and taking hits from UO defenders, but a solo-flyer approach is just not sustainable. UCLA had a player or two on the field Saturday afternoon; Oregon once again looked like a whole team after that discouraging performance against Arizona. 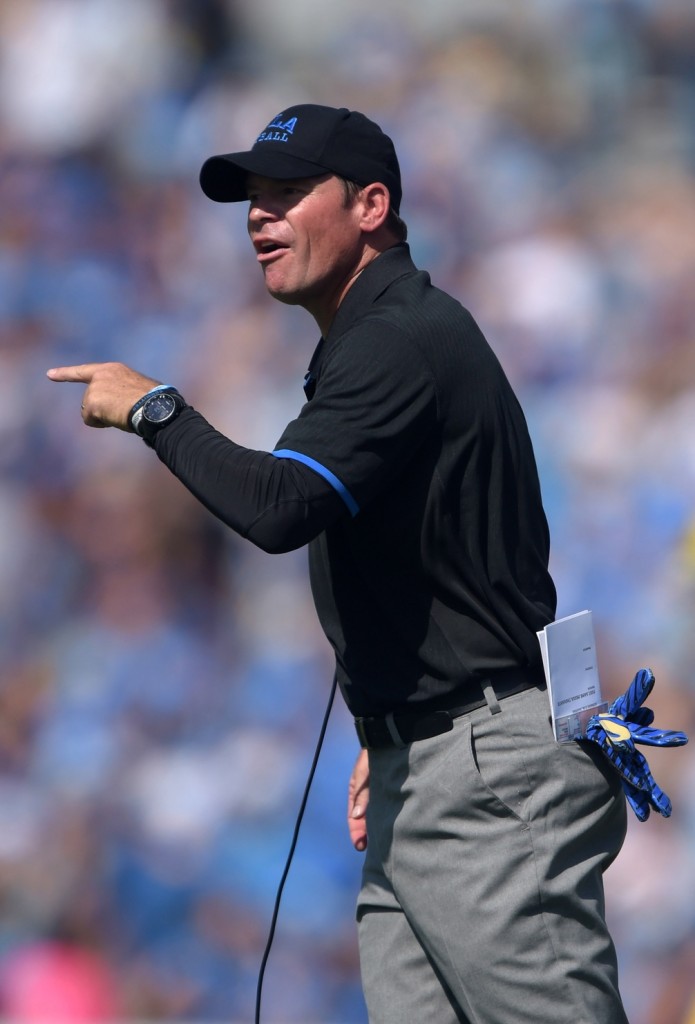 Jim Mora had made progress at UCLA, but it’s one thing to make progress; it’s quite another matter to win the Pac-12 and become an elite in college football. Nothing UCLA had done to this point suggested that the Bruins were about to initiate a glorious reign. Now, UCLA will do well to merely salvage its season, which is spiraling downward as we speak.

Oregon put its best foot forward against UCLA. If it can retain this level of form the rest of the season, it just might get a rematch with Arizona in the Pac-12 Championship Game, and a chance to make a lot of wrongs right before Marcus Mariota calls it a career in Eugene.