This is the nature of college football in the first few weeks of every season: The week-one or week-two result you thought was significant turns out to be a tease, a mirage, an event which fails to carry into the following week. College football is always volatile no matter the month, but it is especially fragile in the first half of September, when players are readjusting to the rhythms of the season and coaches are madly scrambling to get rosters to mesh. Some teams find themselves quickly, but in many cases, early-season wins are more the product not of one team’s discovery of a magic formula, but its opponent’s lack of progress.

Virginia Tech and Ohio State, you may step forward as examples before the college football jury.

In the most important result from the early window of games (barely edging out Virginia’s upset of Louisville), Virginia Tech — fresh from its conquest in Columbus a week before — lost to East Carolina, 28-21. Why is this result bigger than Bobby Petrino slipping on the banana peel? Very simply, Frank Beamer had reason to think that he had regained firm footing in Blacksburg… no, not in relationship to any hot seat, but in the sense that he was in control of a stable program with a once-again credible offense, an offense that was given a good plan when it took the field.

Virginia Tech looked like the program Beamer built when it ambushed Ohio State. On this afternoon against ECU, the Hokies recalled so many of their recent-year demons, especially the ones that were always in evidence in 2013.

The drops by receivers.

The only reason this wasn’t a 34-0 or 38-0 lead for ECU in the second quarter was that the Pirates began to stub their toes as a matter of course. ECU eschewed a 29-yard field goal; committed holding penalties on plays that either scored a touchdown or brought the ball inside the Virginia Tech 5; and fumbled inside the Hokie 15. All those miscues blunted the Pirates’ momentum and enabled Virginia Tech to stay in the conversation. When the Hokies scored late in the first half to make the score 21-7 in favor of ECU, the Pirates had to think that:

A) their early mistakes had left the door open for Virginia Tech;

B) if they didn’t score again, they were going to have a big problem on their hands.

Sure enough, that’s what happened.

Despite the fact that Virginia Tech’s offense continued to get subpar play from every position — no one was immune on Saturday — East Carolina’s offense lost all feel for the game, all the flow it possessed in the first 25 minutes of action. Virginia Tech’s defense reeled in the Pirates’ offense, and given enough opportunities, the Hokies’ offense scrambled to tie the game on a touchdown with 1:20 left. Virginia Tech had begun to carry the weight of the game on both sides of the ball. Overtime loomed as a likely occurrence.

Then came the event that changed the nature of Hokies-Pirates, dealing Virginia Tech the devastating blow that wiped away much of the optimism created by the victory over Ohio State. 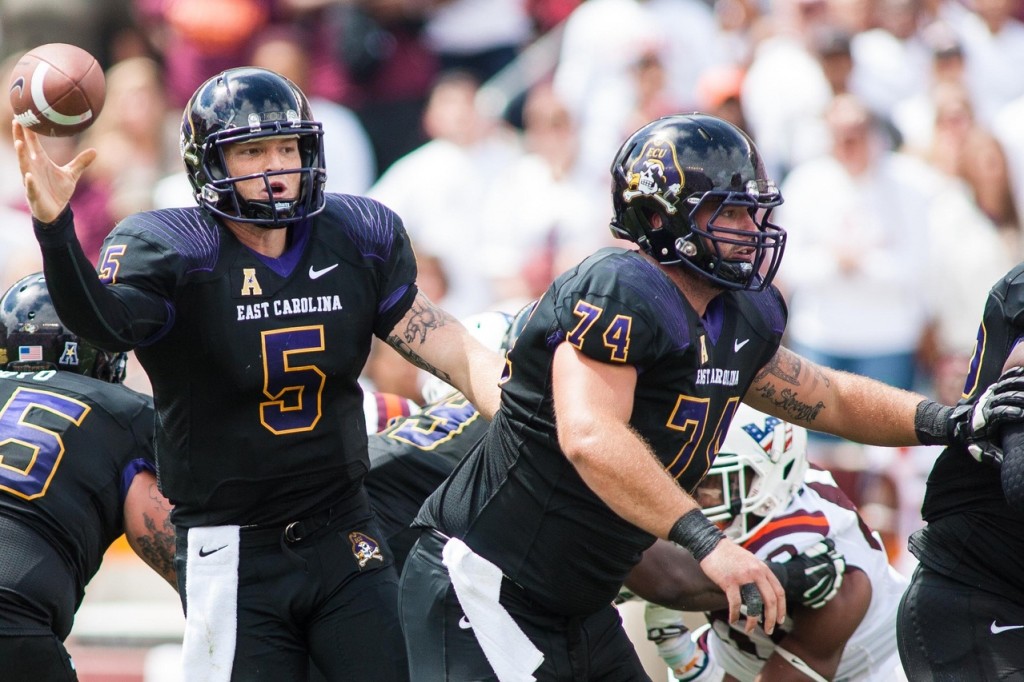 Shane Carden was smothered for the first 28 minutes and 40 seconds of the second half, but he regained his best instincts when his team needed a steely response to scoreboard pressure.

If the inexact science of sports success can be boiled down to a few core truths, one such truth is this: Don’t allow your opponent, when in the middle of a tailspin, to feel good or find some reason to reset the emotional dial.

Virginia Tech was swarming ECU’s offense, so the Hokies just needed to stay on course when they forged that 21-21 tie with 1:20 remaining. Yet, a kickoff out of bounds — while naturally giving the Pirates good field position — allowed the Hokies to feel a pinch of frustration while simultaneously injecting a positive vibe into ECU’s veins. Without that spell-breaking moment, it’s certainly possible ECU still would have scored, but the odds were less likely. Pirate quarterback Shane Carden got back on the beam on that drive, and with receiver Cam Worthy catching two passes for a combined 59 yards on that drive, the Pirates were able to plunge their sword into the Hokies’ side. ECU head coach Ruffin McNeill overcame his foolish decision to not kick that 29-yard field goal in the first half; as a result, the Pirates’ close loss to South Carolina last week might be re-evaluated by plenty of college football chroniclers.

The bigger story, though, is that Frank Beamer, Scot Loeffler, and the Virginia Tech football family have not turned the corner. The road back to prominence didn’t end in Columbus last Saturday. That path will keep winding along until the Hokies offer much more convincing evidence that they’ve climbed past the shadows of 2013.

Yes, one week can transform a team… but the subsequent weeks after a big win either affirm or shoot down the notion of that transformation.

Hokies now down 14-0 to ECU. Could it be 4th loss in last 5 games after beating a ranked team for Va Tech?